Submit portable freeware that you find here. It helps if you include information like description, extraction instruction, Unicode support, whether it writes to the registry, and so on.
Post Reply
11 posts • Page 1 of 1
Message
Author

[Moderator note: this post was split from the InnoExtractor thread.]

Notable difference is the paid feature 'Identify encrypted files' on InnoExtractor is free on InnoEx. 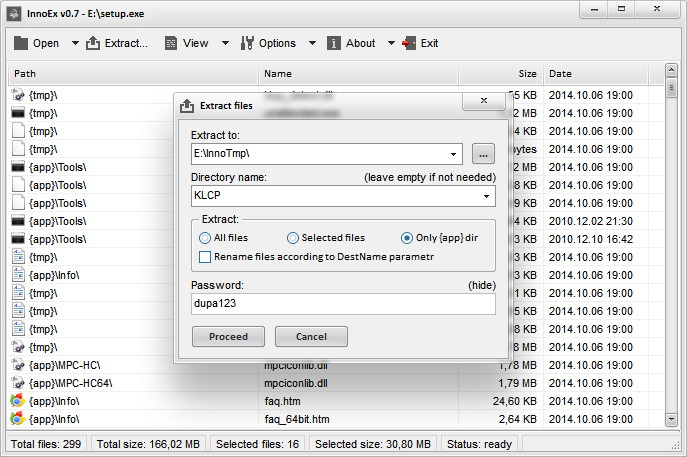 There is an unofficial 0.9.2 release at http://fec.usermd.net/updates-3/

InnoEx is a great find, thanks. In my tests it really seems to be faster than InnoExtractor (as the official performance tests show). Shell integration (on/off) works like a charm.
Top

InnoEx has been added to the database.
Top

@billon
The stable version of InnoEx is 0.9, version 0.9.2 is unofficial.
I also think that linking to Inno Setup Unpacker for manual updates of InnoUnp.exe is better because at SourceForge the user can always get the latest version.
Top

@smaragdus:
InnoEx uses modified version of InnoUnp. If new official version is out and cranq .fec don't update his version of InnoUnp for long time and there some installers which require latest InnoUnp - of course entry can be temporarily edited.

I believe version 0.9.2 is unofficial not in sense of "alpha" or "unstable" but in sense of bugfix and just quick update.
Top

I know this question is much too late, but what is this program for? Just innonup decompression? Can it replace UniExtract? I'd like to add some detail in the entry to that effect.
Causes: Stop the Earn It Bill! / Support Mozilla / Net Neutrality | TPFC Discord channel
Top

I know this question is much too late, but what is this program for? Just innonup decompression? Can it replace UniExtract? I'd like to add some detail in the entry to that effect.

InnoEx does one thing- it extracts Inno Setup installers, but it does it well:

InnoEx is a small and simple GUI for InnoUnp to view and extract resources from Inno Setup installers.

It can detect bundled installers: 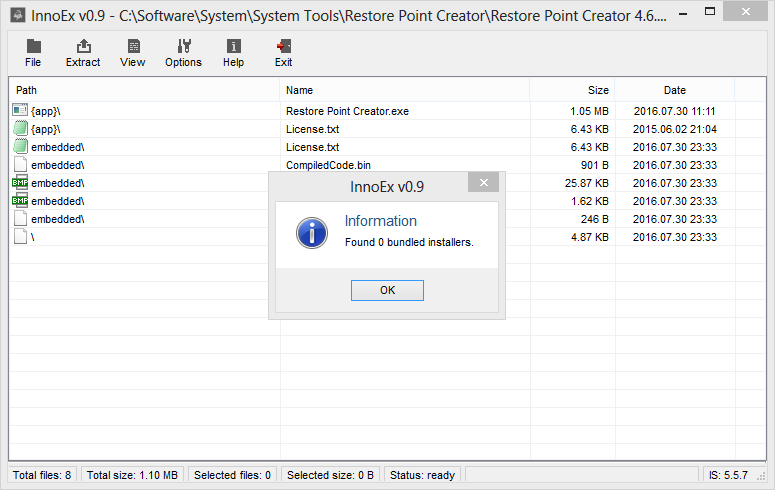 and it can also show registry section:

For me InnoEx is better than InnoExtractor- faster, smaller, truly portable and free without limitations.

@billon
I think that the InnoEx change log clearly shows which version the developer considers to be the latest stable one. Or perhaps it would be better to ask him.
Top

InnoEx website is down. I contacted the developer. If the site doesn't go back online I will have to provide an alternative download but I have only InnoEx version 0.9, I don't have version 0.9.2.
Top