Submit portable freeware that you find here. It helps if you include information like description, extraction instruction, Unicode support, whether it writes to the registry, and so on.
Post Reply
50 posts
Message
Author

PhotoDemon is a photo editor

Nice to see a baas program suggestion, but this one was a step above. Open source (BSD), free, and natively portable (Even advertises that fact on their page)? Is it my birthday? Additionally, it's not often I see something that can compete with existing tools I've been using for over a year.

Beta looks even cooler than the release I initially tested but for the moment ...
Wishlist:
Edit:

As noted above, beta fixes a big wish I had which was some kind of quality options in the save menu. There's lots of great quality options for JPEG but currently very little for PNG (not surprising as it's a photo editor after all). Does support JPEG 2000 and some quality settings (including lossless).
Causes: Stop the Earn It Bill! / Support Mozilla / Net Neutrality (discussion)
Top

Used this today to solve a real issue and it didn't make sense not to be in the database anymore. Maybe this Inception soundtrack I'm listening to is giving me an exaggerated sense of importance but it's time to add.

I mean clearly. Look at this:

That took me less than a minute. Wow.

Edit: Vote for inclusion: PhotoDemon http://www.portablefreeware.com/index.php?id=2656 ... if you think it should be added.
Causes: Stop the Earn It Bill! / Support Mozilla / Net Neutrality (discussion)
Top

I keep getting this error every time I close the app, but settings seem to be saving fine: 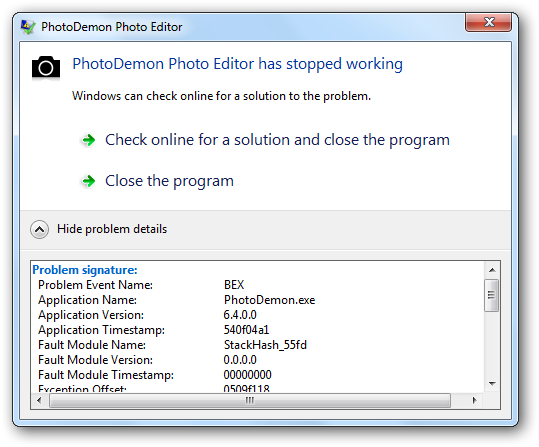 Thanks to everyone who voted. I also fixed the terrible entry text that I wrote evidently after eating too much sugar.


joby_toss wrote:I keep getting this error every time I close the app, but settings seem to be saving fine

Very strange - I haven't seen that. Have you tried the beta?
Causes: Stop the Earn It Bill! / Support Mozilla / Net Neutrality (discussion)
Top 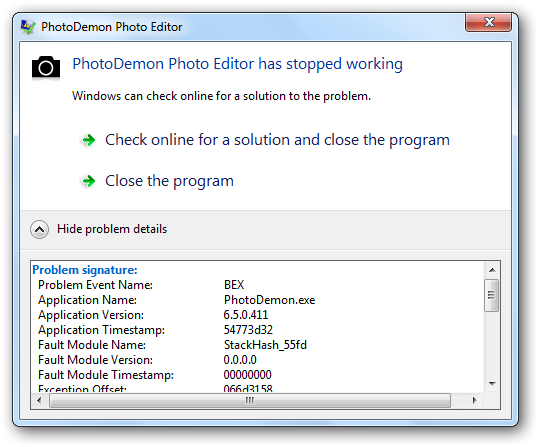 Hi joby_toss. I'm the developer of PhotoDemon. I noticed some extra traffic to PhotoDemon's website from this link, so on a whim I decided to investigate - and I'm glad I did! I sincerely apologize for this bug.

The problem was caused by freeing some resources in an incorrect order, while running on a system where global DEP protection has been manually enabled. (Control Panel > System > Advanced System Settings > Advanced tab > Performance settings > Data Execution Prevention > Turn on DEP for all programs and services.... how's that for a deeply hidden setting??

FYI, if you ever encounter a strange bug like this in a piece of open-source software, I *strongly* recommend sending a short email to the developers. We all love our software to be as bug-free as possible, but because we only work on these projects in our spare time, we don't have access to the same kind of testing facilities that a large company does. User feedback is the only way we find out about rare issues like this one!

If anyone else has any feedback or comments, please do let me know. (Webfork, thank you very much for sharing PhotoDemon here. I've made a note of your suggestions in the thread above, and they're now on my to-do list!)
Top

PhotoDemon wrote:Webfork, thank you very much for sharing PhotoDemon here. I've made a note of your suggestions in the thread above, and they're now on my to-do list!

Awesome. Welcome to the forums and thanks for your work. I hope what we've done here highlights your efforts and gains more downloads/attention.
Causes: Stop the Earn It Bill! / Support Mozilla / Net Neutrality (discussion)
Top

@PhotoDemon: Thank you very much for this app and for taking the time to join us here! Yes, version 6.6.413 works fine for me.

@joby_toss - thank you for testing! I'm so glad it worked.

Given the amount of software you test, I don't blame you for turning DEP on globally. "Better safe than sorry" when you're loading new software every day.

Maybe too much information, but if you're curious, here's one possible explanation for why portable software is prone to issues with DEP. Developing portable software involves a number of unique issues. These issues vary from toolkit to toolkit, but one recurring problem I've faced is writing software that works well with multiple versions of Windows.

In the case of my bug, above, the issue occurred in an area of code that deals with enabling features unique to Windows 7. (Specifically, displaying progress bar updates in the taskbar, by coloring the program taskbar button.) In some software toolkits, it's easiest to just compile different .exe files for each version of Windows. At install time, the installer installs the relevant .exe for the detected OS version.

Unfortunately, portable software developers don't have that luxury, because we have to write a single .exe that covers many different Windows versions. In the case of my bug, I was dynamically creating a chunk of Windows 7 taskbar interface code at run-time, if Windows 7 (or later) was detected. Unfortunately, this involves loading and unloading the taskbar interface in a non-standard way, which triggers DEP crashes. (DEP works by restricting where programs are allowed to execute code. A common trait of viruses and malware is running code outside the normal application memory region, which is exactly what I was doing to enable Windows 7 behavior conditionally. Why not use a normal taskbar interface in PhotoDemon? Doing so would cause crashes on Vista or XP installs, argh!)

Programs with normal installers don't have to "jump through hoops" like this. I envy those developers.

Anyway, this is probably irrelevant information for non-coders, but maybe interesting if you run into StackHash/DEP crashes in the future. Thanks again for helping me with my bug.
Top

Thank you! Believe it or not, this info has great value for me (and I hope for others, too).
Top

(Not a dev by any means, but PhotoDemon's explanation sure does clear my head...)
Top
Post Reply
50 posts