It is easy and fast , because
( 1 ) buttons are king-sized , therefore easy to click .
( 2 ) inside the time setting box , (a) is a Up-Down arrows for time setting , (b) you can use keyboard arrow keys to set time easily and fast .
( 3 ) you can execute two opposite or correlated commands immediately by clicking left or right mouse button on the spot . 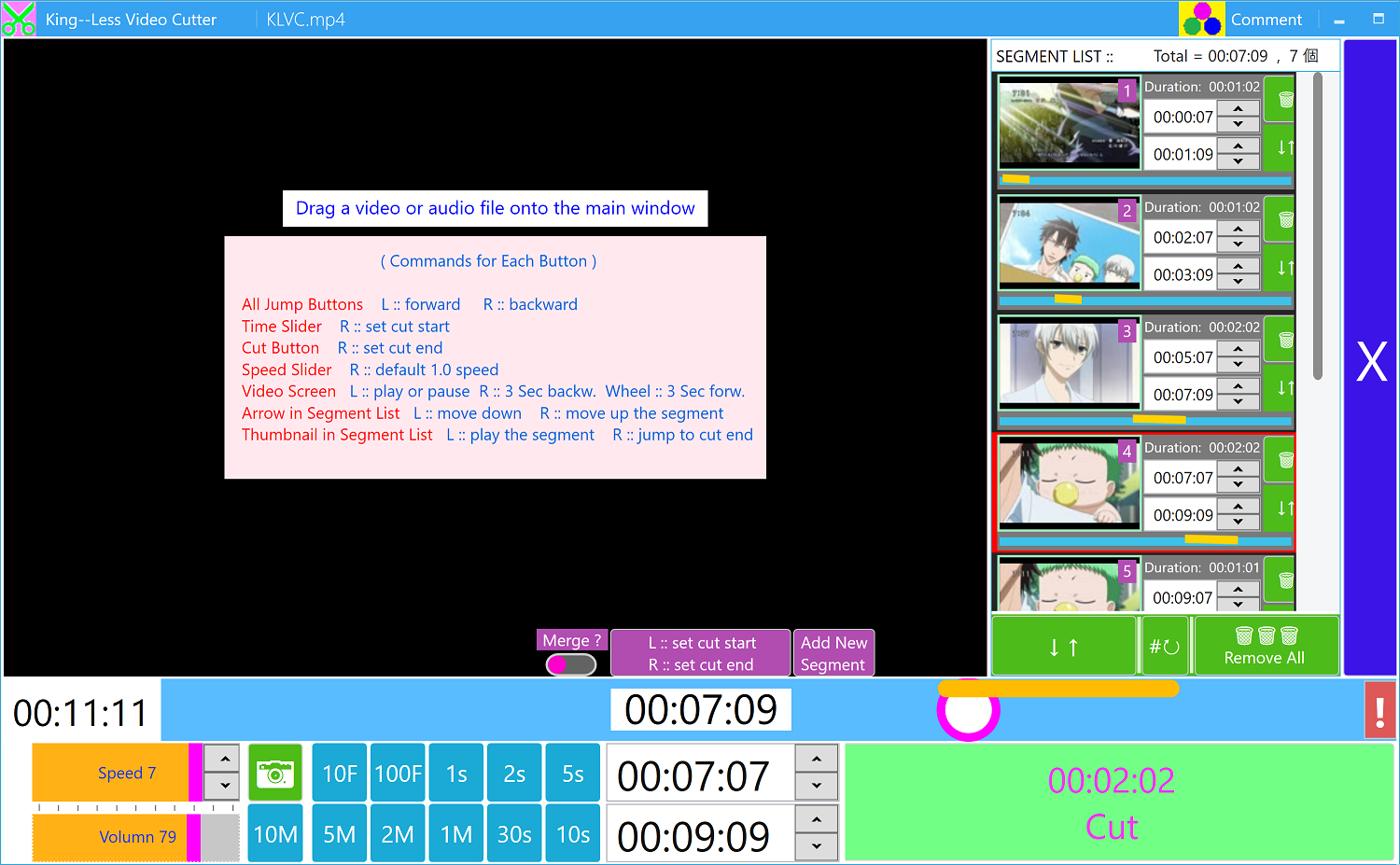 Just for casual visitors that come by the site, you'd probably be more interested in LosslessCut (viewtopic.php?p=90891), which is not portable but is mentioned in more than just one place. As far as I was able to determine, we are the only site mentioning a King--Less video cutter, which isn't encouraging.
Causes: Stop the Earn It Bill! / Support Mozilla / Net Neutrality (discussion) | TPFC Discord channel
Top

webfork wrote: ↑
Sun Oct 03, 2021 7:26 pm
As far as I was able to determine, we are the only site mentioning a King--Less video cutter, which isn't encouraging.

I am Baas wrote: ↑
Mon Oct 04, 2021 7:38 pm
Thar's probably because you omitted some keywords in your Web searching exercise

Just a note: If you downloaded it from the above link before October 9, you may have downloaded version 0930, which does not allow multiple segments
I played with this a bit (I had been using command-line ffmpeg previously, jotting down time stamps, and it was a pain), and have the following observations.
If you use the segment mode, it appears you must collect the segments in the order you want to merge them (so if you want to show a final credits first, clip it first). Also there is no documentation, but hover works well; note the mouse instructions on the first screen as some do not appear again until you close and reopen the program. Early days yet, but I am not sure I was able to get the frame buttons to work.

Finally, here are my notes for my own usage:

My answer :: When using a slider, sometimes it is easier simply to click on the spot you want to move to than to drag until .

2. You says :: but I am not sure I was able to get the frame buttons to work.

My answer :: It seems you used the frame buttons while video is playing.
To check if frame buttons work or not, you need to pause the video first because 10 or 100 frame is too small.

My answer :: Your observation above was adopted as an usage tip of KLVC , and appear in the message box of "1 Basket" button

That's exactly right. I like to make my own help file if there doesn't exist one, and especially as in this case once you drag a video file, the initial instructions disappear from view. The commands for the buttons remain for audio files. Kind of old school, I rely on menues and this app just doesn't use or have them. I also wanted to put down complete notes, as is my thing. Of course, they are never complete...

1. Yes, you can click on the spot as well. I tend to prefer sliding if I don't know the video well
2. The frame buttons do work when the video is stopped. Thanks.
3. Can you elaborate on #3. Just beginning to play with merging segments, but I could not find a workflow to change the order of segments without having to delete and recut it.

I really like this cutter, but it is trial and error. I'm in the process of using autohotkey to make F1 work if King--Less Video Cutter is active, to bring up this cheat sheet as a help.
Thanks for bringing this to Portable Freeware.
Top

@Kim Man-Ki: please edit OP subject to better fit our forum custom -- something like the above "King-Less Video Cutter (lossless media editor)" without any version numbering, which can be included in message body, will make the topic easier to find...