Submit portable freeware that you find here. It helps if you include information like description, extraction instruction, Unicode support, whether it writes to the registry, and so on.
Post Reply
10 posts • Page 1 of 1
Message
Author

Just to note that I haven't actually tried it, but given the popularity of note taking Apps I thought I'd mention it as it does offer a portable version for download, how that performs I will leave for others to discover - the feature set may be of interest to some, especially the import of evernotes data, encryption, and browser addon

Joplin is a free, open source note taking and to-do application, which can handle a large number of notes organised into notebooks. The notes are searchable, can be copied, tagged and modified either from the applications directly or from your own text editor. The notes are in Markdown format.

Notes exported from Evernote via .enex files can be imported into Joplin, including the formatted content (which is converted to Markdown), resources (images, attachments, etc.) and complete metadata (geolocation, updated time, created time, etc.). Plain Markdown files can also be imported.

The notes can be synchronised with various cloud services including Nextcloud, Dropbox, OneDrive, WebDAV or the file system (for example with a network directory). When synchronising the notes, notebooks, tags and other metadata are saved to plain text files which can be easily inspected, backed up and moved around.

The application is available for Windows, Linux, macOS, Android and iOS. A Web Clipper, to save web pages and screenshots from your browser, is also available for Firefox and Chrome.


The portable application allows installing the software on a portable device such as a USB key. Simply copy the file JoplinPortable.exe in any directory on that USB key ; the application will then create a directory called "JoplinProfile" next to the executable file.

Joplin sure looks interesting with its comprehensive feature set and multi-platform capabilities -- encompassing mobile ones and even running as a CLI application.

But, alas, it is yet another Electron-based note taker (check the changelog at https://joplin.cozic.net/changelog) and the portable download alone is a mighty 92MB, so it is definitely not for me.

Let's see how others fare. Thanks for the tip anyway. 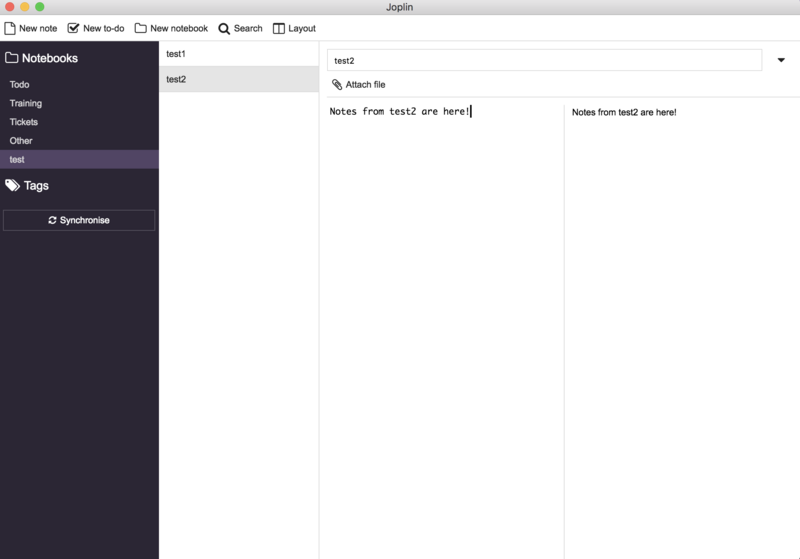 Oh well, I thought if I didn't mention it, people wouldn't notice - my plans for promoting Electron-based world domination are thwarted once again

Joplin is a free, open source note taking and to-do application, which helps you write and organise your notes, and synchronise them between your devices. The notes are searchable, can be copied, tagged and modified either from the applications directly or from your own text editor. The notes are in Markdown format.

Joplin is a feature rich app with plenty of options for different workflows. Markdown is definitely a plus.

Unfortunately, it appears to be Electron based (am I wrong?), which means five different processes for the portable version and over a 100MB memory footprint on launch.

As noted, full changelog and downloads at https://github.com/laurent22/joplin/releases. 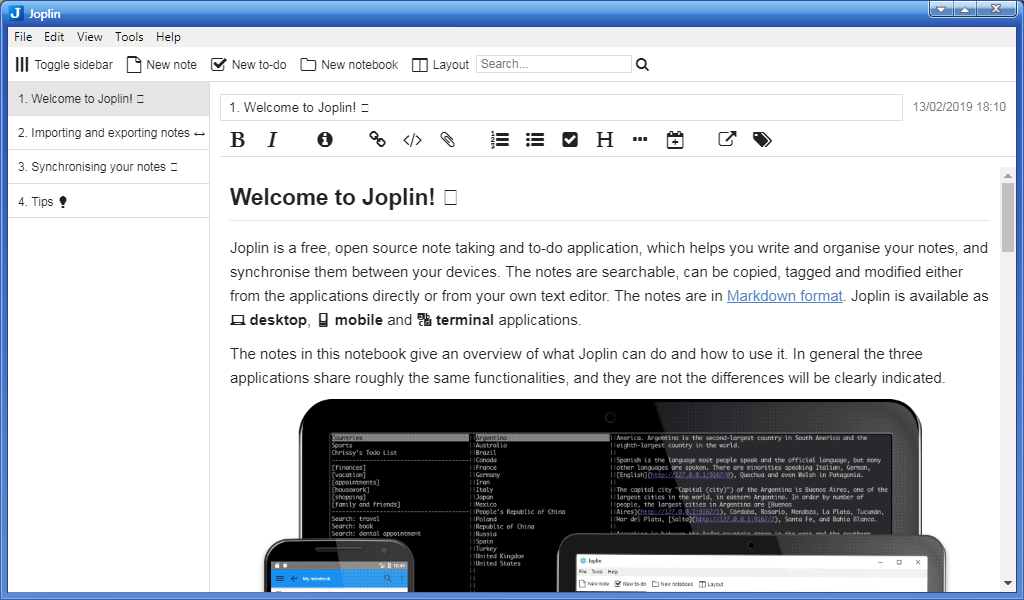 It's indeed Electron, which I know is not everybody's cup of tea

I realized the other day that I'm sharing a crazy amount of information on via a free simplenote service. It has an unclear security status, so I started looking into some alternatives. (Note that I'm using Alephnote for this, which is not affiliated with and doesn't require the Simplenote service.)

As such I started looking for something to replace it and saw that Joplin is open source and has built-in encryption. It's Electron, which is not ideal, but I think I can use PsExec to force it to use just one process. Anyway, on the test ...

Status: Not portable. Writes settings to the local JoplinProfile (good) but also saves a ton of data to AppData\Roaming ... amusingly the program tells you right up front when you click on options "Notes and settings are stored in: C:\Users\USERNAME\Downloads\JoplinProfile"

Optionally, you can run Psexec to help reduce the program interference with other running programs: PsExec64.exe -d -low -a 2 "C:\temp\JoplinPortable.exe"

webfork wrote: ↑
Sat Aug 08, 2020 10:15 am
Optionally, you can run Psexec to help reduce the program interference with other running programs: PsExec64.exe -d -low -a 2 "C:\temp\JoplinPortable.exe"

Nice!
I do NOT have other accounts.
Top

webfork wrote: ↑
Sat Aug 08, 2020 10:15 am
Optionally, you can run Psexec to help reduce the program interference with other running programs: PsExec64.exe -d -low -a 2 "C:\temp\JoplinPortable.exe"

I expect those kind of tweaks will be part of my program posts going forward. Just wish I could find something that would push multiprocess tools like Joplin down to one or two.
Causes: Stop the Earn It Bill! / Support Mozilla / Net Neutrality | TPFC Discord channel
Top
Post Reply
10 posts • Page 1 of 1