LightZone (http://lightzoneproject.org/) is a wannabe LightRoom alternative, i.e., a non-destructive photo editor that went from being a commercial product to free OSS (for more info, check http://en.wikipedia.org/wiki/LightZone). I suspect LightZone is dependent on Java, so portability shouldn't be difficult to achieve via the usual methods (e.g., jportable) but I haven't tested it... Free registration at the homepage is required for downloading.

http://lightzoneproject.org/content/about wrote:LightZone is professional-level digital darkroom software for Windows, Mac OS X, and Linux, that includes RAW processing and editing. Rather than using layers in the way that other photo editors do, LightZone lets the user build up a stack of tools which can be rearranged, readjusted, turned off and on, and removed from the stack. It's a completely non-destructive editor, where any of the tools can be re-adjusted or modified later -- even in a different editing session. A tool stack can even be copied to a batch of photos at one time. LightZone always operates in a 16-bit linear color space with the wide gamut of ProPhoto RGB. 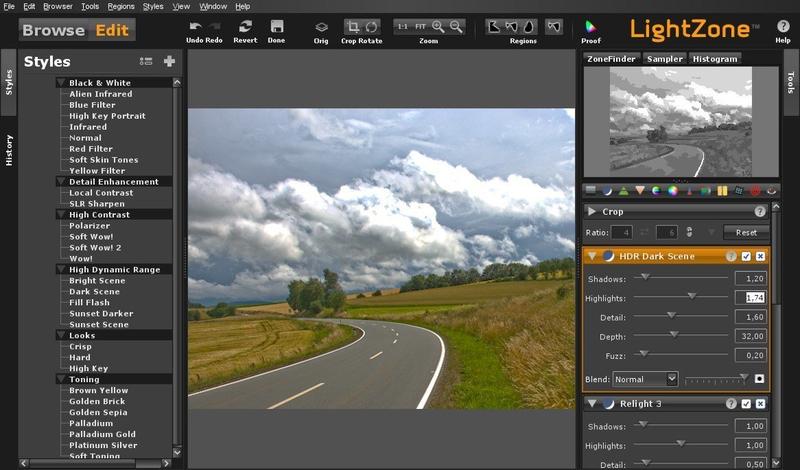 Ugh. Why would you open up a whole new user base by making it open source and then limit involvement by using mandatory registration?

If I remember correctly, LightZone refuses to be extracted. It also appears to be non-portable, since it writes a significant amount of settings to HKCU\software\JavaSoft\Prefs\com\lightcrafts

That applies to the .exe file (LightZone.exe). There are two .jar files (lightcrafts.jar & lightcrafts-windows.jar) which I tried to run with JPortable. The first gives an error (see below) and the other does nothing. Pressing continue also does nothing. It leaves a lot of junk behind too:

That being said, it's a capable program. It's got what most people would need to process RAW images, although I still prefer RawTherapee/Photivo if just for their interfaces alone. LightZone's Java roots translate into a clunky array of boxes with jagged/flimsy text (screenshot below has a jpg because I needed a quick filler image).

But still, definitely worth being in one's RAW arsenal, even if it's not portable. It's one of those programs I'd make a concession for.
Top

Thanks for your testing, shnbwmn. You sure did confirm my expectations about LightZone...

I'm hoping someone else will test out the .jar files. I have a feeling that those errors are specific to my setup.
Top

Midas wrote:Thanks for your testing, shnbwmn. You sure did confirm my expectations about LightZone...


Registration Revised, June 10 2020: REGISTRATION IS NO LONGER NECESSARY FOR DOWNLOADS.