I decided to give it go; albeit "standalone", UniPDF is unfortunately not at all portable -- it keeps its settings in a 'config.xml' file in the program folder alright, but at the same time it creates no less than 33 different registry keys (as well as leaving behind folders in %APPDATA% and %TEMP%, which will totally freak stealth purists). A shame, really, 'cause in spite of the lack of OCR capability, UniPDF is a handy, lightweight and efficient offer for document conversion.

[I tried to beat up a quick'n'dirty™ yaP launcher (see https://pastebin.com/bzN4u7QZ), but it is currently unable to delete all those keys (more on that later).]

[EDIT: you can now portabilize UniPDF with http://yap.rolandtoth.hu/configs/UniPDF.ini; my previously improved UniPDF yaP launcher config still is at https://pastebin.com/zzASDydi.] 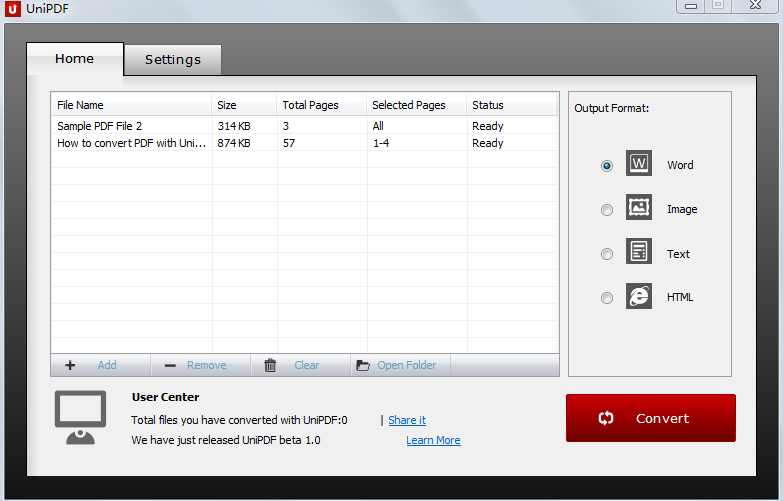 UniPDF seems to be payware now, any link to last freeware version?
Top

I suppose the last free version should fit my needs, especially the PDF to HTML capability, thanks, I'll be expecting your upload.
Top

I tested the download link and it worked.
Top

Thanks to the link to the article, Midas.

However, the article is about PDF to Word conversion though, which isn't really important to me. The important thing for me is the other way around - Word (or OpenDocument) to PDF.

LibreOffice works for my needs, but good to know about these other apps.
is it stealth?

freakazoid wrote:... The important thing for me is the other way around - Word (or OpenDocument) to PDF...


As well as a few auxiliary PDF manipulation operations:

@Smaragdus
thanks for the link, you're certainly a handy freeware versions depot man.
Top

freakazoid wrote:The important thing for me is the other way around - Word (or OpenDocument) to PDF.

freakazoid wrote:... The important thing for me is the other way around - Word (or OpenDocument) to PDF...

I prefer an offline alternative.

freakazoid wrote:The important thing for me is the other way around - Word (or OpenDocument) to PDF.

Yeah, but I found that SoftMaker's PDF export isn't as accurate as LibreOffice's.
is it stealth?

Mirror update: I couldn't seem to get smaragdus' ge.tt downloads to work but I did find a list over at freeware.tools:

The RAR file is listed as unknown by VirusTotal but the program inside is clean:

EDIT: I couldn't get this to run in Win10x64, just threw up errors when trying to convert PDF to Word.

EDIT2: I couldn't get it to work outside of the Program Files directory, but it does works well. For example, here's an RTF export of some sheet music (complex word and image placement test):

As of this writing (June 2, 2021) UniPDF has a free standalone version (current version: v.1.3.4).
It is a no-install app, but it is not portable since it writes various keys in the registry.
But it can be run from a USB drive attached to any computer.
The limitation of this free version is three conversions (Pdf to Word-RTF) per day.
Home page: https://unipdf.com/ (with the download link)
Comparison of the free version with the commercial versions: https://unipdf.com/order/
Note: all the DLLs, EXEs are clean (verified on virustotal.com)
Top
Post Reply
13 posts • Page 1 of 1