Submit portable freeware that you find here. It helps if you include information like description, extraction instruction, Unicode support, whether it writes to the registry, and so on.
Post Reply
7 posts • Page 1 of 1
Message
Author

[Mod note: the present is the official forum topic for ImageUSB; https://www.portablefreeware.com/?id=2979]

ImageUSB is a free utility which lets you write an image concurrently to multiple USB Flash Drives. Capable of creating exact bit-level copies of USB Flash Drive (UFDs), ImageUSB is an extremely effective tool for the mass duplication of UFDs. ImageUSB also supports writing of an ISO file byte by byte directly to an USB drive (*). ImageUSB can also be used to install OSFClone to a USB Drive for use with PassMark OSForensics™. 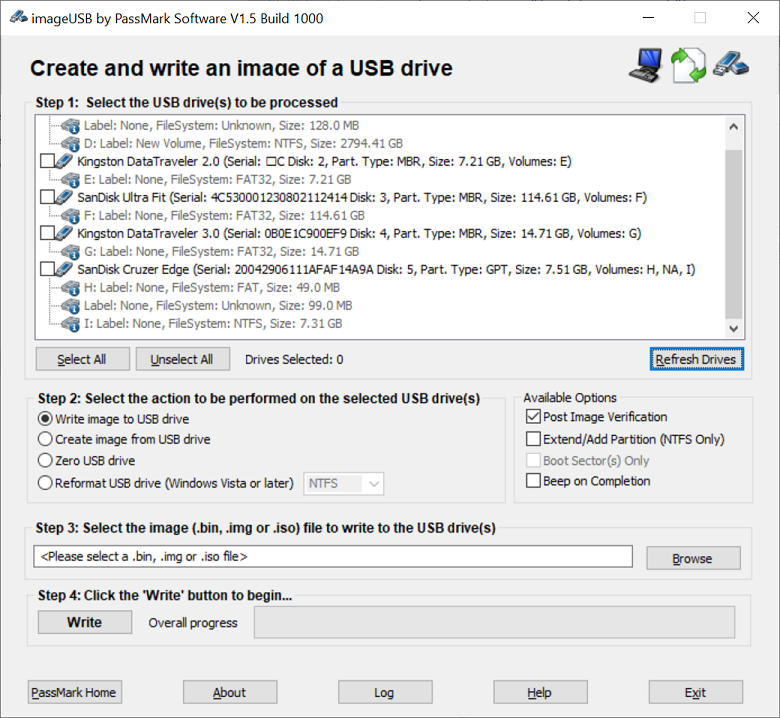 ImageUSB is a free utility which lets you write an image concurrently to multiple USB Flash Drives.
Download and extract archive. Stealth.

I could have really used this back in the day. Can it copy from one drive to another? Tho I guess USB Image Tool post your http://www.portablefreeware.com/forums/ ... =4&t=20173 addresses that.
Causes: Stop the Earn It Bill! / Support Mozilla / Net Neutrality (discussion)
Top

FTR, full changelog is included in 'ReadMe.txt' inside download ZIP.

'ReadMe.txt' author wrote: Release 1.3.1001
WIN32 release 26 Apr 2016
-Fixed a bug causing imageUSB to incorrectly write the header block back to the disk when image is not of even 1 MB chunks.

Release 1.2.1005
WIN32 release 9 Sep 2015
- Addressed issue where some drives have the same volume GUID and would cause imageUSB unable to determine disk number for the UFD.

Release 1.2.1004
WIN32 release 29 Jul 2015
- Addressed issue during image creation where imageUSB will error out before finishing the image for certain drive.

Release 1.2.1003
WIN32 release 30 Mar 2015
- Format will add an MBR at sector 0 and partition entry table will point to the partition that was formatted.
- Updated Format progress bar to stop and reset when completed.

Release 1.2.1002
WIN32 release 24 Mar 2015
- Updated and added various Text/Strings to be more relevant to the action being performed.
- Added speed in status. Speed is typically govern by the slowest IO (e.g. write). Speed displayed is the average for the entire process.
- Increased visible GUI log size

Release 1.1.1014
WIN32 release 16 Dec 2013
- Option to Zero the Master Boot Record. This will allow Windows to see the full size of the drive after reinserting. Windows should automatically prompt to format unrecognized drive.
- New warning message if you try to write an image located on any of the drives selected as destination drives.

Release 1.1.1013
WIN32 release 16 Oct 2013
- Verify Bug Fix
- In DebugMode, when verifying option is checked and when image is a valid imageUSB .bin file, the checksum will be calculated on the actual image as well. Drive checksum comparison will still be against checksum stored in header.

Release 1.1.1012
WIN32 release 16 Oct 2013
- Write verification is now supported for images not created with imageUSB. A checksum will be calculated for the image and then compared to the image written on the UFD.
- Enabled UFD list while imageUSB is writing/creating images. Should allow you to scroll the list to see progress of all UFD when more than 4 drives are used.
- Source code clean up

Release 1.1.1010
WIN32 release 22 October 2012
- Fixed a program crash when reading fake USB drives. It seems that some USB flash drives are tricking the Windows API to incorrectly recognizing the end of the drive.

Release 1.1.1009
WIN32 release 9 July 2012
- Allows writing images larger than destination drives. End of the image will be truncated and not be written to the drive.

Release 1.1.1008
WIN32 release 19 January 2012
- Added a delay on retry for failed write attempts. Will wait 1 sec before retry.
- Address an issue where writing image would sometimes fail with Error 5: Access is Denied.

Release 1.1.1007
WIN32 release 16 November 2011
- Fixed some erroneous debug logging messages.
- Tweaked verification settings, should report which offset verification failed at.
- For Writing to flash drive, upon write failure, imageUSB will retry up to 3 times to rewrite to the failed location.

Release 1.1.1005
WIN32 release 6 July 2011
- Added the ability to write .ISO to USB drives. The drive must be bigger than the iso and the drive size will
be truncated to the size of the iso. To recover lost storage, use Window's Disk Management tool.

Release 1.1.1004
WIN32 release 25 January 2011
- Fixed an issue that would occur if more than one drives are being processed at once (happened sporadically).
- Added "-d" command line option that will log additional debug info
- Fixed typos

Release 1.1.1003
WIN32 release 22 December 2010
- Notification/prompt when imaging finishes.
- Option for post image verification for both creating from and writing from usb drives. Previously, writing to drives always was verified. Verification may double the imaging time.
- Each image created with imageUSB will have an accompanying log file written with checksum values calculated during the creation process.
- MD5 & SHA1 checksum calculation implemented
- Now with more warning prompts! To prevent accidently destroying data.
- Simultaneous image creation is now supported. See the help documentation for naming convention used.
- Running imageUSB with -l command line will save a log (The same one as seen at the bottom of the GUI).

-Fixed bug where the software was incorrectly reporting/trying to clear the BitLocker status of the drive when detection failed.

I went ahead and added this to the database: ImageUSB: https://www.portablefreeware.com/index.php?id=2979 ... please vote.

I'm not sure how many of our users are actually going to generate multiple USB images, but for the price and size of common drives, why not make 2 or 3? The zero wipe functionality is also pretty great.
Causes: Stop the Earn It Bill! / Support Mozilla / Net Neutrality (discussion)
Top