ConEmu is an actively developed FOSS project (with a thriving community, it seems) for Windows console emulation, natively portable (instructions are included in the download package, but in a rush just create an empty 'ConEmu.xml' file inside the ConEmu folder -- otherwise settings get written to HKEY_CURRENT_USER\Software\ConEmu; not tested for stealth!), available in x32 and x64 versions, and with more options than you'd want to shake the proverbial stick at...
A rather interesting snippet from ConEmu's FAQ page: Download ConEmu Stable (currently v120727c) @ http://sourceforge.net/projects/conemu/files/Stable/
Last edited by Midas on Sat Jul 08, 2017 3:52 am, edited 2 times in total.
Top

I've been using this recently and it's pretty good.

Great when you have to manage different things like bash, cmd all in one window.
is it stealth?

ConEmu is currently at version (Build) 131026; changelog (too long to post here) is at http://code.google.com/p/conemu-maximus5/wiki/Whats_New.
Top

Nice, thanks. I noticed that

is always created with 3 minor settings (about history and screen colors). Perhaps it can be disabled with some smart combination of checkboxes in the Settings, I wasn't able to figure out.
yet another Portablizer • List of programs made portable by yaP
Top

Note: this was originally posted over on the Cmder thread (and most of the screenshots are of that program) but I'm really talking about one of the component programs, ConEmu, so I've moved it over to this thread.

I was drawn to this mostly because it allows for generating a restricted user, which -- unless you're a system administrator -- has to account for 95% of the things that are done on the command-line: 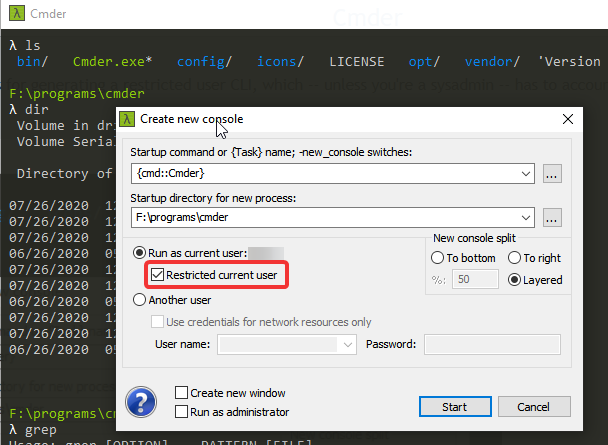 However, the home page had some very nice additional bits:


The main advantage of Cmder is portability. It is designed to be totally self-contained with no external dependencies, which makes it great for USB Sticks or cloud storage. So you can carry your console, aliases and binaries (like wget, curl and git) with you anywhere.

Those are two nice things, but there's a LOT under the hood with this program. If you ever wanted to have bash, powershell, and regular CMD all in the same tabbed window, here's a great start:

Also this looks to be very much still in development, with an update out last month: