Quod Libet is a GTK+-based audio player written in Python, using the Mutagen tagging library. It’s designed around the idea that you know how to organize your music better than we do. It lets you make playlists based on regular expressions (don’t worry, regular searches work too). It lets you display and edit any tags you want in the file, for all the file formats it supports.
Unlike some, Quod Libet will scale to libraries with tens of thousands of songs. It also supports most of the features you’d expect from a modern media player: Unicode support, advanced tag editing, Replay Gain, podcasts & Internet radio, album art support and all major audio formats

User Interface
• Simple user interface to Just Play Music if you want
• Useful as a small window or maximized, no feeling cramped or wasted space
• Album cover display
• Full player control from a tray icon
• Recognize and display many uncommon tags, as well as any others you want. Especially useful for classical music.

Library Browsing
• Simple or regular-expression based search
• Constructed playlists
• iTunes/Rhythmbox-like paned browser, but with any tags you want (Genre, Date, etc)
• Album list with cover art
• By directory, including songs not in your library

UNIX-like integration
• Player control, status information, and querying of library from the command line
• Can used named pipes to control running instance.
• Now-playing is available as a fixed file

Starts fast, despite the installed size. After adding my reasonably big music folder to the library (84GB indexed in about 3 minutes, both program and music folder on magnetic disc), I ran a test and was impressed by the output quality. Although there are no obvious options to configure the device etc., the sound was noticeably clearer than in my other used players (1by1, XMPlay, AIMP, Foobar, Winyl, Resonic) - the most impressive beeing the stereo channel separation. The file I played by chance was a poor 128kb/s MP3 recorded from an old vinyl, so this is by no means generally valid.
I wonder what "GStreamer" is - it seems to be the default output backend, but I never heard of...
Although I was impressed by the output, the overall layout of the player doesn't really suit my needs - there's nothing wrong (it even has a conventional file browser), it's only... snobism

But (other) audiophile enthusiasts should have a look at the player - seems capable and mature, without the fancy eyecandy, but with advanced options for (unix)techies

Tip: if you feel the cover display is too small, click the cover! It then displays as windowless overlay to the main player window

>> Interesting for the portablefreeware-community? Should I add the player to the database?
Top


I wonder what "GStreamer" is - it seems to be the default output backend, but I never heard of...

As far as I know most Linux audio players use GStreamer (Website, Wikipedia, Software that uses GStreamer) for encoding and decoding media formats.

About Quod Libet- I have used it in the past and I generally like it with one exception- no support for cue sheets, that is the reason I never bothered to update from version 3.6.1- for me no improvements can be a compensation for the lack of a core feature such as cue sheets support. An issue was opened long ago but the developer is hostile towards cue sheets:


Cue sheets really are an anachronism that has to real reason to be kept alive any longer.

I suppose that support for cue sheets will never be implemented which is a pity for me- I cannot use audio players which cannot render cue sheets. If Quod Libet supported Cue sheets I would use it because overall I like it better than Clementine and MusicBee. 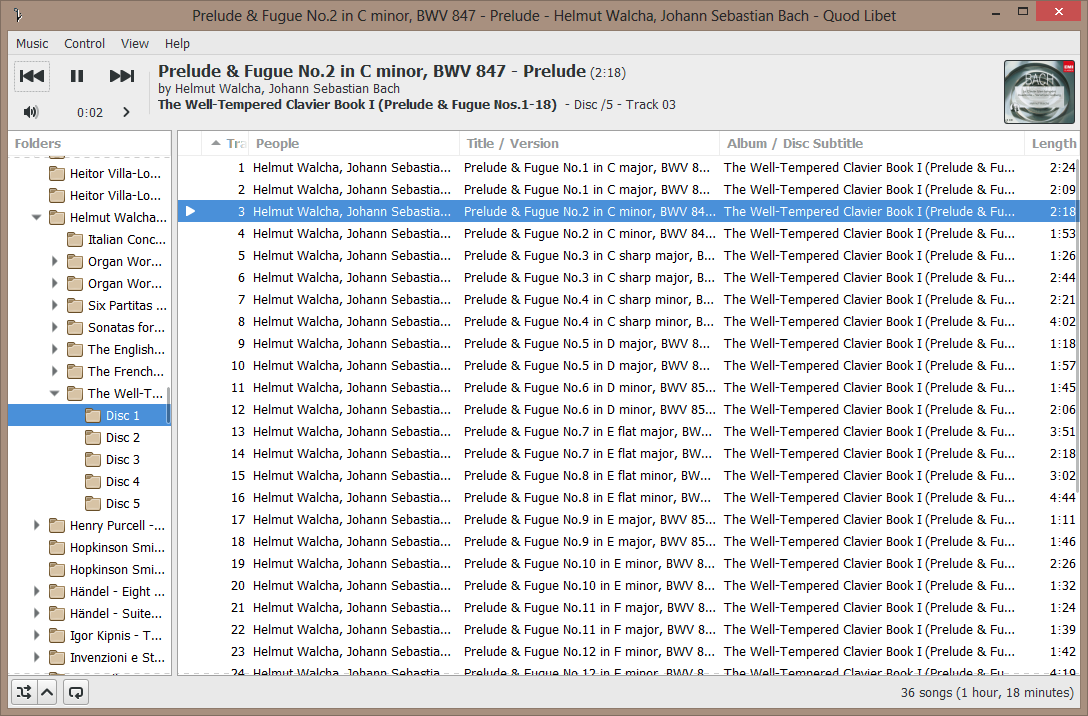 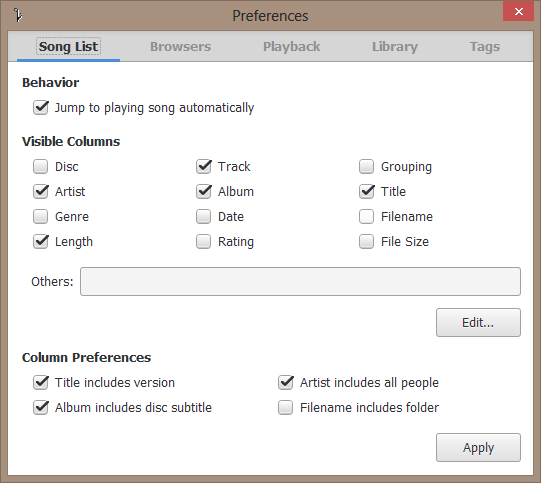 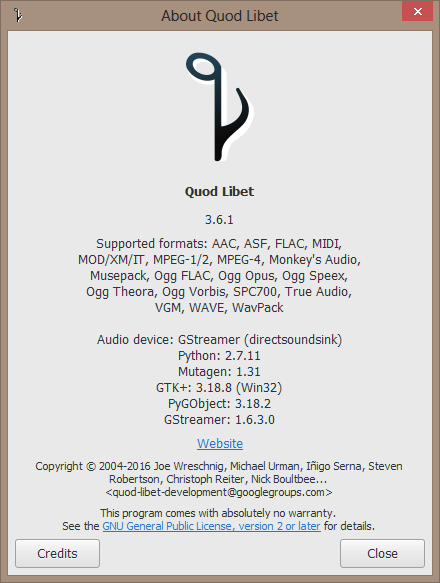 I don't expect the GUI to have changed drastically but I might be wrong.

Overall Quod Libet is a robust audio player but the lack of support for cue sheets is the fly in the ointment.
Top

Thanks, smaragdus!
Yes, the GUI seems untouched.
Regarding CUE-sheets - I was shure Quod Libet supports them, but after looking at so many players in the last few days I might have mixed it up with another one...
I must admit, for me CUE-support is not crucial, so I'll keep an eye on the project.
...although "the windows-user" (like me) already has Foobar - searching for equivalent alternatives is a difficult task

Interesting. But with all those traces left behind, I really don't think it is TPFC database ready yet.
Top

@zorro
I forgot to mention that if you add Quod Libet to the database I will vote for it (although I totally disagree with the developer about cue sheets)- the program is solid and powerful and in my opinion it has the quality to be included in the database but my vote will not be enough to make the database entry public. For me support for cue sheets is indispensable, in short- almost all my music is in lossless formats- a single lossless file per disc plus a cue sheet, splitting these single files into separate tracks is not an option because I seed rare stuff and I do not want to break seeding.

@Midas
In terms of this forum Quod Libet is portable but not stealth. I think that the registry entries are created by GTK+. There are far worse examples of database entries that are not portable at all- all settings are saved to registry yet such entries were accepted and are public now. If this site was mine I would not allow programs that write to registry but since such stuff is accepted I do not see any sensible reason Quod Libet to be rejected because one of its components (GTK+) writes to registry, the program is portable (data and settings are saved in config sub-folder in program folder) but not stealth (recently-used.xbel in AppData and HKEY_CURRENT_USER\Software\GSettings in registry). Actually I am not sure about the registry entry because it might be created by other GTK+ programs that I have used in the past.
Top

smaragdus: I think I'll add Quod Libet to the database (the next days) - may I use one of your screenshots?
I tested some other players as well these days and came to the conclusion, that this one has some potential (although the author doesn't like CUE-sheets

Testing all this players I also realised how many promising projects died in the past 20 years and that there are very few alive, promising and mature projects to rely on - namely Winyl, Foobar, XMPlay, 1by1, (VU-Player), (Resonic). The vast rest develops into the bloat, framework-of-a-framework, feature-overkill, connectivity-to-all-and-everyone, always-online-and-social-connected direction. Of course this is only my conservative, old-fashioned opinion

(and Philippe, you're right: something like 1b1 with it's file size of under 1MB is a shining example of faithful coding - if only Martin Pesch, the author, would not be so indifferent about implementing WASAPI or at least ASIO output...)

On this occasion I re-discovered a player (already mentioned in the forum, but without database-entry), that I used way back in the Win98-times: Dekibuleé

A real gem, bass-based, directory-driven like 1by1 and skinable. I'm right now playing some songs with it

BTW.: I had the idea, that for bass-based players that are no longer developed it should be no problem to simply update the bass modules. It partially works - depending on how old the last version is. Like this I made a "frankenstein"-version of Billy, mixing up the latest stable, the latest beta and an older bass-module. It's now (as for years since Win98) my associated mp3-player on Win 8.1 x64


smaragdus: I think I'll add Quod Libet to the database (the next days) - may I use one of your screenshots?

Of course you can use any image I have ever posted at this forum. I hate copy right and everything I upload can be used freely and without any restrictions. So there is no need to ask in the future, use any image you might like. You can use the whole gallery- the last 4 are animated images, the previous ones- static. The difference between 17 and 18 and between 19 and 20 is the delay between frames- 17 and 19- 2 seconds, 18 and 20- 3 seconds.


Testing all this players I also realised how many promising projects died in the past 20 years and that there are very few alive, promising and mature projects to rely on - namely Winyl, Foobar, XMPlay, 1by1, (VU-Player), (Resonic). The vast rest develops into the bloat, framework-of-a-framework, feature-overkill, connectivity-to-all-and-everyone, always-online-and-social-connected direction. Of course this is only my conservative, old-fashioned opinion

I do not update players if the old versions I am using work fine for me and offer all the features I need. In some cases (MusicBee) I find the interface of the newer versions ruined, in other- the skins I prefer may not work with the newer versions (AIMP). I have a grudge against foobar2000- there is no support for Monkey's Audio (APE files) out of the box and the plug-in should be downloaded separately (at least with the old version I am using)- for me this is ridiculous as I consider Monkey's Audio the best of the popular lossless codecs (superior in terms of compression to both FLAC and WavPack). About XMPlay- I find the default skin unusable. About Resonic- I would not use it for several reasons- not free (limited free version), no support for cue sheets (I requested support for cue sheets almost 6 years ago- on 2012-12-27), I do not like the developer (for me it would be pure hypocrisy to use a product created by someone I dislike). And yes, indeed many audio players were abandoned- for example I have always liked Spider Player and I still use it sometimes when I feel nostalgic but unfortunately it does not support cue sheets. Other players although not abandoned- for example Clementine, have not seen new stable releases for almost 2 years.
Top
Post Reply
8 posts • Page 1 of 1