by Midas
Old topic update: I probably shouldn't be the one relaying this, but (I'm all about fair-play

and) UltraSurf has a new domain at https://ultrasurf.us/ and is currently v13.04 (couldn't find a changelog)...

by Midas
Topic update: I briefly mentioned Freegate a while back, but as it is program still being developed and apparently portable, I reckon a post is in order.

Freegate comes in a single executable that saves settings to an INI file alongside it -- it also spawns 'dtwpc.dat' for web settings and 'fghelp_en.htm' as an help file. I had no time to check for stealth status and please be aware that Freegate launches IExplorer on startup by default, but this can be changed in settings. Needless to say, it will trigger a Windows firewall alert if it is activated.


http://www.dit-inc.us/freegate.html wrote:Freegate is an anti-censorship software for secure and fast Internet access. It was developed and maintained by Dynamic Internet Technology Inc, a pioneer in censorship-circumvention operation. [...] Freegate works by tapping into an anti-censorship backbone, DynaWeb, DIT's P2P-like proxy network system. 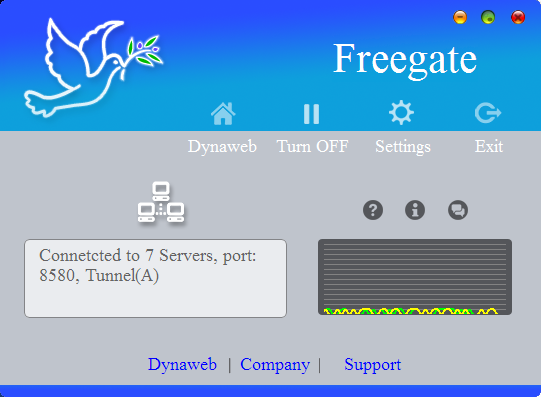 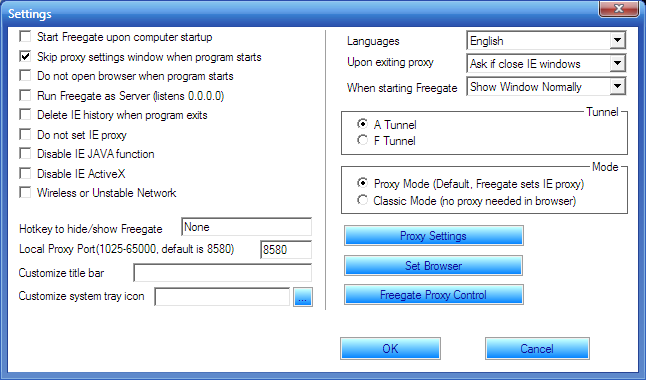 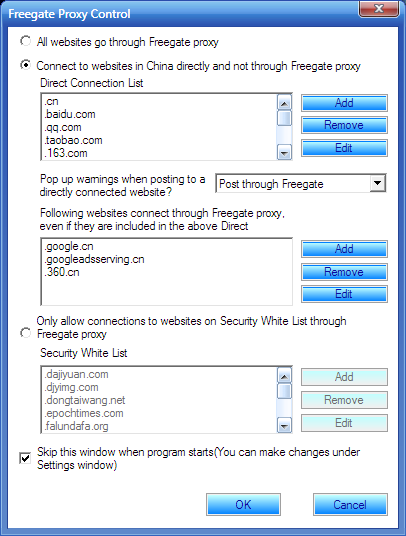 by webfork
From the screenshots, this looks very tied to Internet Explorer. Is that accurate or is there just additional functionality for that browser? I say so because IE as a browser isn't really an option --- I recently started using IE again as part of a work project and it seems to have only worsened with time (among other problems, it crashes frequently).

by Midas
I think the answers you're looking for lie beyond that "Set Browser" button in the second screenshot I posted...

by webfork
Old thread update: so UltraSurf is apparently alive but not doing much. Here's a review I found on the project: https://blokt.com/guides/ultrasurf-review

Short version appears to be that it's a free, browser-based, and slow encrypted proxy, which is less secure than even a basic VPN. Still, it does appear to still function and get around some Internet censorship tools.

Clients include Windows and what appears to be a beta Android VPN.

Re: Censorship circumvention (UltraSurf and Freegate)

by Midas
Further reporting regarding UltraSurf found in a NPR political piece:


An initial security audit of Ultrasurf commissioned by the State Department, however, reflected significant problems with the software, which was still relying on technologies that were considered cutting edge in 2013. The audit, conducted late last spring and reviewed by NPR, concluded that 'censoring Ultrasurf nation-wide would have been trivial for a moderate-budget adversary'. It said a 'complete and fundamental redesign' would be needed to guarantee that hostile forces could not readily shut it down'.