Zabkat's (https://www.zabkat.com/) editor2 has been mentioned a few times here at TPFC forums but has no single topic really fit to post news and updates. Well, that ends now.

The closest thing I have found to a dedicated homepage is this 2010 blog post containing some portability workaround (that, luckily, has seen big improvement since then; editor2 is now natively portable):

Editor² begun its life as an embedded thread in 2xExplorer [...] Although it won't substitute your main editor (say for writing your source code), it is nevertheless a very compact quick'n'dirty editor/viewer thingme to be appreciated by programmers and lay users alike. 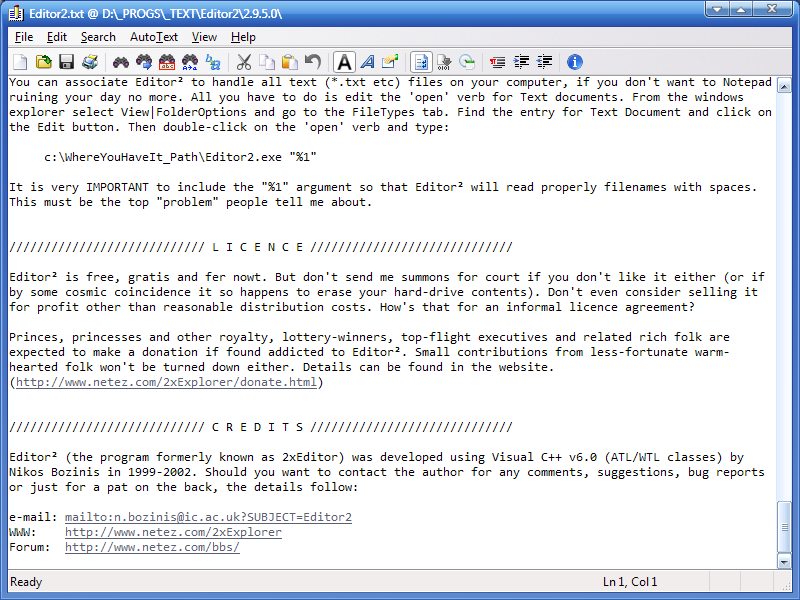 Let me quote myself on the peculiar arrangement of editor2 distribution:

Please note that if looking for the 64-bit version, you'll have to grab it from the corresponding non-free Pro or Ultimate download packages.

Editor2 is made portable by placing an empty 'ed2.ini' file in its folder before first run.

Related and relevant topics you should browse if interested in editor2:

Thanks for giving the program it's own thread. The topic definitely comes up often enough that a source is called for.
Causes: Stop the Earn It Bill! / Support Mozilla / Net Neutrality (discussion) | TPFC Discord channel
Top

* Internal editor² version 2.96 with better handling of high DPI screens. If you need it in dark mode, tweak the background colors to taste from program settings (VIEW > OPTIONS menu).