by smaragdus
First, TeraCopy version 3.0 is as buggy as hell:

so for me TeraCopy version 3.0 is a demo- the already transferred stuff will stay for ever and will be copied time again- what an abomination.

Third- the image provided in the database entry is for TeraCopy Pro- on my system the graph of the demo doesn't look that good: 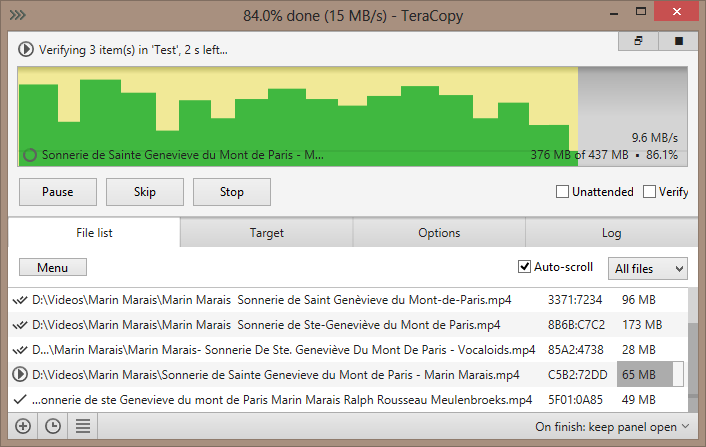 Forth- it offered to send bug report and it extracted data from my mail client which I think is a privacy violation.

In short- for me TeraCopy version 3.0 is not just a demo but a buggy garbage to boot.

by webfork
I retested the latest version of TeraCopy and -- whatever issues were happening with the program when Smaragdus tested it last -- they seem to have been resolved. I've added a note about the pro version to the entry.

by starshakur
Is there any reason for a portable installation of TeraCopy?

1) I installed it according to the How to extract, got one entry in Programs & Features list and two in the context menu.

At the end the folder size of 1) and 2) (without the uninstall files) is identical.

There's a case to be made for not using the install process when there are other routes, but I recommend it in this case based on two things:

1. Developer support is generally easier when you follow their processes
2. Fewer steps in the extract process mean it's more accessible to casual users

3. From my own experience, TeraCopy is not entirely straightforward as a portable, meaning features and settings differ according to which way you proceed.

so for me TeraCopy version 3.0 is a demo- the already transferred stuff will stay for ever and will be copied time again- what an abomination.

But most importantly, as of 12/21/2020 the TeraCopy web page "Feature Matrix" shows that the free version (still) does not have the feature "Edit file lists". That same page describes that feature as

Unnecessary files and folders can be removed to reduce the transfer time.

Also, it does not specify how it handles
Personally, I want the link/juncture itself copied. I do not want the program to follow through the link and copy the actual file or dir. I suspect from its forum posts by users that TeraCopy will follow the link/juncture and copy more content.
All times are UTC-08:00
Page 2 of 2