[Mod note: the present is the official forum topic for WinAuth; https://www.portablefreeware.com/?id=2856]

With all the data breaches, exploits and brute force attacks of late, one can never be too careful with online credentials. If consistently used, two-factor authentication (or 2FA for shorth) can prove a powerful mitigating factor.

WinAuth supports any service or website that uses the Google Authenticator, Microsoft Authenticator or an RFC 6283 based authenticator. It also supports games such as Battle.Net (World of Warcraft, Hearthstone, Diablo III), GuildWars 2, Glyph, WildStar, Runescape, SWTOR and Steam. WinAuth requires no installation and is a single executable file, and so can be run from a USB drive or stored and run from cloud files services such as DropBox, Google Drive, or SkyDrive. 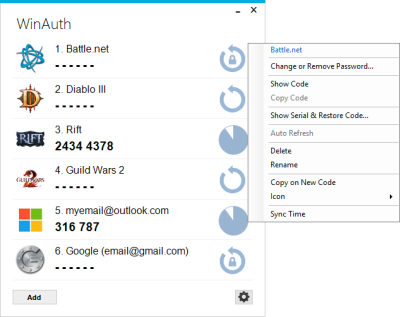 Even though it hasn't been updated in a long time and the dev has "moved on", I still use this on my PC for Steam and such, I hope the day it finally "breaks" never comes.
Top

Ding-A-Ling wrote: ↑WinAuth has been languishing in the private database...


Thanks for spotting that. Entry updated and voted.

I did some edition to bring it in line with our other entries. If it hasn't been updated in some time, are the sites mentioned still valid? Has anyone tested those?
Causes: Stop the Earn It Bill! / Support Mozilla / Net Neutrality | TPFC Discord channel
Top

FYI it writes a small entry in the registry at "\HKEY_CURRENT_USER\Software\WinAuth3", at least the latest/final beta does.
Top

mossydoodle wrote: ↑how it's diffent from other password managers?


This was already in the OP: en.wikipedia.org/wiki/Multi-factor_authentication.
Top

mossydoodle wrote: ↑ how it's diffent from other password managers?

In short: password managers are for static passwords, usually allowing longer and more complex passwords, as well as a way to enter them quickly. Multi-factor authentication is for dynamic passwords that are sync'd between your machine and the server that cannot be guessed or discovered, only calculated. If you wanted to have very good security, using both is ideal.
Causes: Stop the Earn It Bill! / Support Mozilla / Net Neutrality | TPFC Discord channel
Top
Post Reply
8 posts • Page 1 of 1