by milentechie
[Mod note: the present is the official forum topic for USB Disk Ejector; https://www.portablefreeware.com/index.php?id=1406]

Mobile Mode: This allows for portability; you can carry the program on a USB device and then use it to remove that device from whatever computer you are using. For example - you can run the program from a USB pen drive, enable mobile mode and then eject that pen drive. Click the 'run in mobile mode' checkbox to restart the program in mobile mode.

IPod Eyecandy: If you have an IPod connected via USB, then it will have an IPod icon instead of the usual disk icon in the program.

Minimize to Tray: If you minimize the program, it will minimize to an icon in the system tray and wont show in the taskbar until restored.

Command Line Arguments: You can start the program with two different command line options, both can be used at the same time.

/SILENT - stops the balloon tip from appearing when the program is minimized.

by Simon.T
[Mod note: several old posts originally in another topic about USB Disk Ejector have been merged here -- namely the ones made by Simon.T, JohnW and Zach Thibeau below.]

USB Disk Ejector allows you to quickly remove USB devices in Windows. It can be run as a command line program or as a normal GUI program that easily ejects any USB device with a click. For Windows XP/Vista. 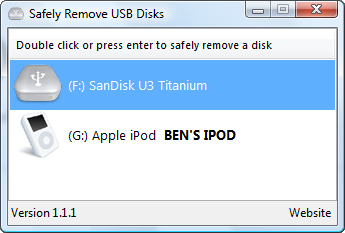 by JohnW
Not a very satisfactory post I'm afraid.

I've used it for a long time so that it runs when PStart exits.

by Simon.T
Oops! I forgot to search for it

Still, it looks like some handy software
by AlephX
Hi!
There is a new release with improved portability.
It works under vista too.

WHY MY NAME IS ON THE SUGGESTED BY FIELD ???

by Zach Thibeau
Lol, I can't answer unfortunetly
by Simon.T

by Zach Thibeau
I only Have access to the forum controls only as I only offered to be a mod against spam I mean if Andrew wants another helper in updating apps then he will add me but for now I'm Just the sheriff who battles and sends spam to the Trash
by Simon.T
AlephX!!!

btw, the database is getting updated real fast lately... who's the updater?? Fluffy, AlephX, Andrew

I would saw Andrew as I see more on the site the the rest of the Gang
by Simon.T
Thank you (???) for fixing the 'Suggested by' field

kowcop wrote:Shouldn't the thread title be linked to the software developer rather than some blogspam

That's how I found it + maybe the "blogspam" could have some useful information to other people?!

Read what's new @ http://quick.mixnmojo.com/readmes/USBDiskEjector.html
All times are UTC-08:00
Page 1 of 2