Submit portable freeware that you find here. It helps if you include information like description, extraction instruction, Unicode support, whether it writes to the registry, and so on.
Post Reply
54 posts
Message
Author

Fast real-time backup? Haven't tested but it sure looks interesting -- beta versions are free and beta testers are eligible for free licenses. The site feature summary: 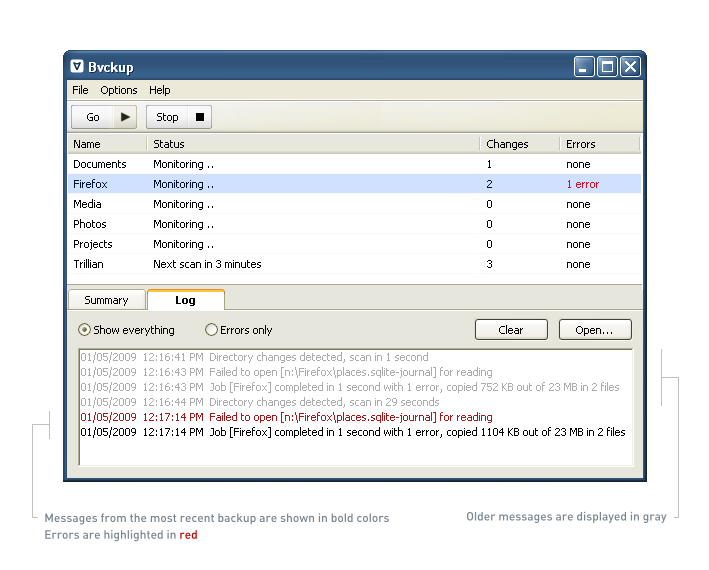 If the "-c" is omitted, then the program defaults to using %LocalAppData%/Bvckup folder.

This is an excellent app, the fastest backup program I've ever used. Leaves others in the dust, even FreeFileSync which was my previous backup program of choice.

It's on version 2 now (http://www.bvckup2.com), and has just come out of beta, so no longer free, but "There's also a free beta release and as I have mentioned before I will be maintaining it with bug fixes, but it won't be seeing any new features and there'll be no tech support available for it."

Not completely portable as the "-c" option mentioned by Midas above requires an absolute path, but if that's acceptable then it's completely stealth.

Not adding it as it's not technically freeware even though there's a free version available, but definitely recommended. Updating my backups now takes less time than FreeFileSync takes just to scan the disks for changes.
Top

olliebean wrote:Not completely portable as the "-c" option mentioned by Midas above requires an absolute path

To workaround this path issue, you could launch Bvckup from a batch file...

Took me awhile to figure out how to use that batch code... I have a 'Config' folder for all the bvckup2 settings so the batch looks like this...

My path has some spaces so I had to use quotation marks. It kept saving the settings in the root of the drive otherwise hehe... Anyway neat trick Midas. Could probably use that for other apps that requires absolute paths.
Top

Duh! Silly me, I always go and forget something as basic as enclosing in quotes the now omnipresent paths with spaces...

If wanted, the path can be displayed in the console window for visual checking by interpolating the following between those two lines:

Ouch. This is amazing. Wish I'd taken a closer look at this back in 2012 when Midas first pointed it out.

Will try to test shortly.

Edit: The site indicates that the program is going to be in perpetual beta and therefore always free. I'm not sure I know what that means, but it does mean that this can move to the submission, rather than payware forum.
Causes: Stop the Earn It Bill! / Support Mozilla / Net Neutrality (discussion) | TPFC Discord channel
Top

So here's the full sequence (presumably preparing for an entry):

At the bottom page of http://www.bvckup2.com/ you can find the download link for the beta version which is free as well.


Last beta
In addition to the production version that is actively developed and supported, we also make the last version from the beta testing cycle available for download.

Last beta is completely free and has no restrictions or time limits.

1.Last beta has been feature-frozen since April 2014 and it receives only critical fixes, when and if they surface.

2.We provide no technical support for it.

Did you try bvckup 2? The interface is much better and you can easily filter out files to exclude if you wanna do that single file backup thing. No errors. There could also be some changes to performance and compatibility with Truecrypt. I only skimmed through the support forums and there were some mentions of it.

I don't see a reason to stick to the old version when the the 2nd version beta has the same 'Free As In Beer' license.
Top

webfork wrote: If anyone knows a way around this, please let me know

All of this is resolved in Bvckup 2.

To explain, the original version is now 5 years old and it is something that I wrote in a course of 3-4 weeks for my own use. I then put it online just to gauge the interest and surprisingly it took off. So a couple of years ago I sat down and started redoing the whole thing from scratch. It took about 18 months of full-time effort and the result is Bvckup 2. If you are still using the original version, you should seriously consider switching.

In view of the overly favorable reception Bvckup has had recently, I decided to summarily check the latest Bvckup 2 (beta, since it's the only freeware version) for an update post; here are a few findings...

Bvckup 2 beta requires an install/uninstall cycle to get to the files, as (Uni)extract doesn't seem to work. As with the previous version, the very breadth of its features is impressive, especially if you consider the extremely small footprint, so I'll just touch the more prominent ones: Bvckup 2 beta has 32 and 64 bits native versions, is able to run either interactively and as a service, can copy system locked files (via VSS), has delta copy capabilities, and is totally portable via the above mentioned batch file workaround.

As the software itself -- mainly a single executable that doesn't even reach 600 KB -- the homepage is exquisite in it's simplicity, tasteful layout and scope, covering every information aspect a user might need. Also, the support forum (http://bvckup2.com/support/forum/) is a real treasure trove of valuable information (with portability discussion at http://bvckup2.com/support/forum/#!/topic/43). 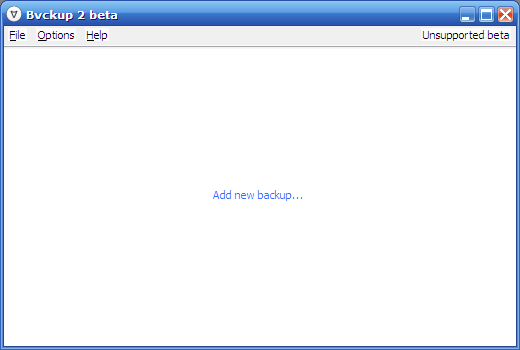 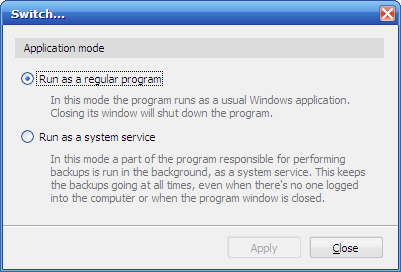 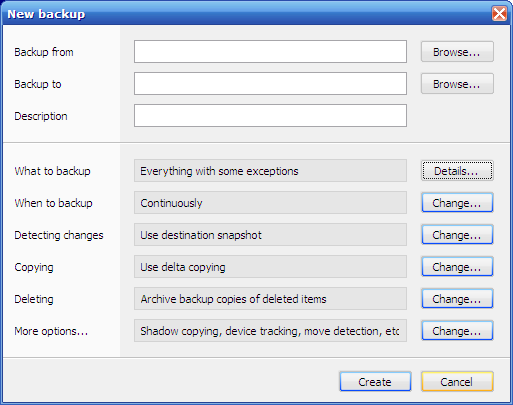 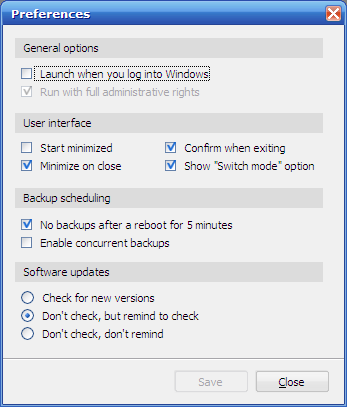 author of http://www.bvckup2.com/ wrote:[Bvckup 2] Last beta: In addition to the production version that is actively developed and supported, we also make the last version from the beta testing cycle available for download. [Bvckup 2] Last beta is completely free and has no restrictions or time limits. Caveats: 1. [Bvckup 2] Last beta has been feature-frozen since April 2014 and it receives only critical fixes, when and if they surface. 2. We provide no technical support for it.

I just realized that, in order to have the console window close immediately after launching bvckup, that code should be instead:

On a humorous note, Bvckup 2 beta might provide a great (if puzzling) example for globalization: the previous version was distributed by Yaletown Software Design from Vancouver, Canada; the newer one is distributed by Pipermetrics SA which is Swiss, incorporated in Lausanne; the developer is Alex Pankratov, previously in charge of the Hamachi VPN software (http://www.portablefreeware.com/forums/ ... c.php?t=28); the current beta installer is flagged as Canadian English, while the executable itself is in US English... talk about multiculturalism.

vacherin wrote:All of this is resolved in Bvckup 2

Also, thanks for replying to this. I always appreciate when developers take the time to sign up and post.
Causes: Stop the Earn It Bill! / Support Mozilla / Net Neutrality (discussion) | TPFC Discord channel
Top

Just a quick note of warning: if you're running Bvckup2 "last beta" portably and get offered an update, you must decline and update manually -- I didn't and got my beta executable replaced with the commercial version (seemingly v1.68, as opposed to v0.68 for the "last beta").
Top

Midas wrote:Just a quick note of warning: if you're running Bvckup2 "last beta" portably and get offered an update, you must decline and update manually -- I didn't and got my beta executable replaced with the commercial version (seemingly v1.68, as opposed to v0.68 for the "last beta").

This was an oversight on my end. When updating from all earlier betas the update dialog shows the change log that includes a warning that updating will pull down a production release and start the trial. I simply forgot to add the change log for 0.68 -> 1.68 update. I added it now, so if you check for updates, you will see something like this - 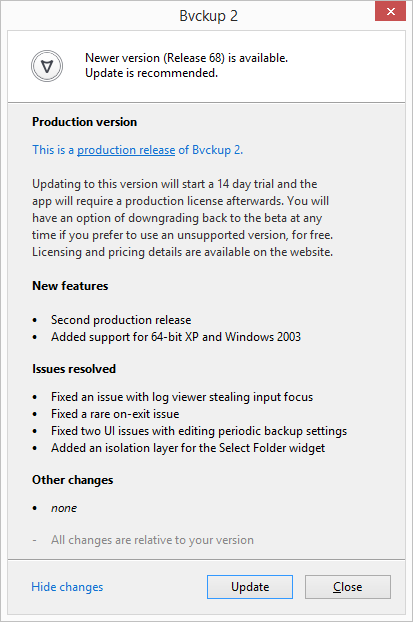