Submit portable freeware that you find here. It helps if you include information like description, extraction instruction, Unicode support, whether it writes to the registry, and so on.
Post Reply
10 posts • Page 1 of 1
Message
Author

i decided to link you to this site

i only used Win32pad - the "Notepad replacement"
specially for the "Highlight URLs" ability, since years

maybe others standalone freewares like notepad++
does the same but i never really searched for
even if i use this last one for php, xml or else

Very old topic update: quick note that this is now the official forum topic for Win32pad (http://www.portablefreeware.com/?id=691), still at v1.5.10.4 (changelog at http://www.gena01.com/win32pad/changelog.shtml).


http://www.gena01.com/win32pad/ wrote:Win32Pad is a feature filled text editor that is written with a programmer in mind. Its main purpose is to provide enough functionality that is missing from notepad without sacrificing file size and performance. It's very fast and powerful. This editor is written so that you can install it and start using it. The features are added to make your experience better, easier and more efficient. 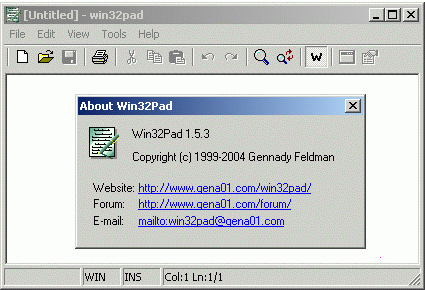 Other related topics: @webfork: could you edit first post subject accordingly? Thanks in advance.

Belatedly re-discovered this gem of a Notepad alternative, what a pleasure to use such a barebone but convenient tool !

Just applied a tiny cosmetic touch to a marginally misleading button label, which, oddly enough,
had been invariably bothering me before every click :

There you are ! ...feeling much better already...

The only thing I can think of that keeps it from being perfect is a character case changer.

I also did a little hacking, mostly cosmetic -- replaced its default icon for Notepad's and integrated a XP manifest... 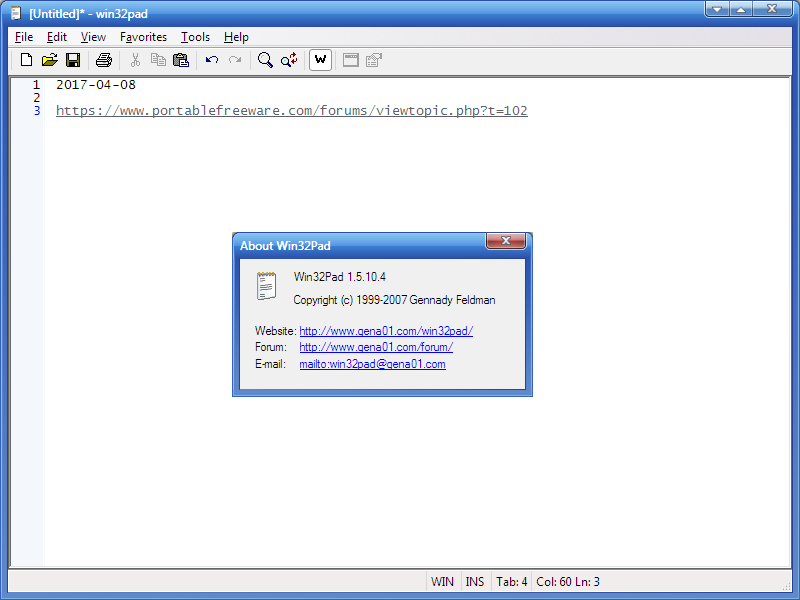 Agreed,
and I wouldn't mind short-cuts for font effects such as "Boldface" "Italic" "Underline" " ̶S̶t̶r̶i̶k̶e̶T̶h̶r̶o̶u̶g̶h̶ ̶" either, would you ?

(*) Gennady Feldman, who supposedly is still around, if one is to believe his web site home page footnote Copyright © 1998-2017
Top

I'd satisfy myself with UPPER and lowercase selection switcher, with associated shortcuts like Shift+Ctrl+U and Shift+Ctrl+L -- editor2 has them.

But I regret to have to tell you that the font effects you crave are a feature of word processors as opposed to text editors -- the latter deal with plain text without introducing any extraneous marking codes similar to the ones we use here in the forum posts...
While I recall seeing something sometime that used such resources only visually without affecting the underlying plain text file, that isn't common at all.

Talk of the devil and all the details come running...

Midas wrote:...But I regret to have to tell you that the font effects you crave are a feature of word processors as opposed to text editors -- the latter deal with plain text without introducing any extraneous marking codes similar to the ones we use here in the forum posts...

I would readily agree with your opening statement...

...except that some of our so-called notepads Text Editors (lest we re-classify them exclusively under the Word Processors category)
do also include such fonts style/fonts effects quick selection capability, regardless of the type face used :

and even (Lord Almighty, help us !), Windows very own WordPad ...

But allow me to digress to another point of yours : Assembly Manifest

Midas wrote:...I also did a little hacking, mostly cosmetic -- replaced its default icon for Notepad's and integrated a XP manifest...

What are the benefits of integrating an XP manifest to win32pad ?
Do you mean you did replace the existing win32pad internal assembly manifest with one lifted from WinXP Notepad ?

Inquiring mind...and so forth...

Those two examples (by that very fact) already fall into the word processor category.

Since apparently I failed at effectively conveying the difference between the two types of software, let's see if others fare better:
Regarding the manifest question, it's mostly a matter of aesthetics, making programs adapt to a more current look. Originally, Win32pad didn't have any manifest, as is the case with a lot of pre-XP born software. Adding the manifest (and changing the dialog font from "MS Sans Serif" to either "Tahoma" or "MS Shell Dlg" -- trust me, you don't want to get creative here...) will make it less blurry and add rounded corners to buttons and window frames.
Top

Word-Processors vs Text-Editors 101 primer cheeky reference duly noted, with thanks...

To me, jesting aside, a Text-editor/Notepad is first and foremost a small utility for quickly jotting down a few notes,
eminently suited, for instance, to drafting e-mail messages or forum posts.

If a specific fleet-footed Text editor, (say QJot), happens to include additional functions (like font type mofifiers "B" "i" "u" ... )
traditionally available in heavy-duty Word-processors, so much the better, but that does not change the ultimate destination of the beast.

In fact, correctly classifying QJot is such an ambivalent proposition that our very own TPFC's DB includes no less than three categories for the single QJot entry : Should we perhaps, henceforth, pigeonhole Qjot and its ilk as Glorified Tex-Editors-Notepads instead ?

...Guess we might just as well start arguing about the gender of Angels...

(who, at least, could prove handy recruits in warding off the above

Twisted Devil's Evil spirits of yours )...

Awkwardly, what we have is a matter of form over function, as you keep missing the point by prioritizing (subjective) user experience over format -- I have been known to fall in the same pit in the past; but not anymore, hence my quest to enlighten the world...

Let's be absolutely clear here: there are only two ways you can add formatting to a plain text file, a) being by use of some form of mark up (like the ubiquitous HTML or my preferred MarkDown), and b) through non-standard encoding of said formatting, which will obviously break the universal currency of the humble TXT file. (And I decide against c), which would be magic, since I'm just a Muggle.)

Tools meant to work with plain text files without mangling them are conventionally called Text Editors and they are a dime a dozen at TPFC alone.

Anything else is a Word Processor and, to accommodate formatting metadata, they resort to a number of different file formats, be it RTF, DOC, or ODF, just to name the most common. Their common feature is none of their files are human readable without them, as you can easily check by opening any of those files in a text editor.

I vaguely remember some very old word processors that used ASCII control codes to denote text format, allowing their files to be readily opened by any text editor, but that doesn't change anything. The issue here, at least for me, is that addition of any extraneous formatting codes will immediately degrade the universal human readability of a plain text file -- i.e., in the absence of the specific tool(s) it was created with or for. I'm not factoring in required levels of literacy, either.

As practical example, I have files dating back to the (mid) 90's in my computers (yep, I'm that old *sad grin*).

The only way to achieve this is by decoupling your data from the tools you use to edit/process/massage it with...

Also you're probably right about Win32pad manifest, it's been some time since my bumbling about with it.
Top
Post Reply
10 posts • Page 1 of 1