digiKam is an advanced digital photo management application for linux/KDE, which makes importing and organizing digital photos a "snap". The photos are organized in albums which can be sorted chronologically, by folder layout or by custom collections.

Short version: this is a big wait-and-see. The Windows version is apparently both huge and crashy. Once it gets a little more stable and the KDE install bits get pared down, this could be a powerful addition to the portable community.

I did some research on this before I came across the PA thread that goes into a bit more detail: http://portableapps.com/node/28757
Last edited by webfork on Mon Aug 19, 2013 2:44 pm, edited 1 time in total.
Causes: Stop the Earn It Bill! / Support Mozilla / Net Neutrality (discussion) | TPFC Discord channel
Top

Update: The program is now at least starting on my machine so that's a win right there, but it did still crash and some of the preview functionality wasn't working. Still, there's a remarkable amount of functionality in this program. Just the search component alone is startlingly detailed: 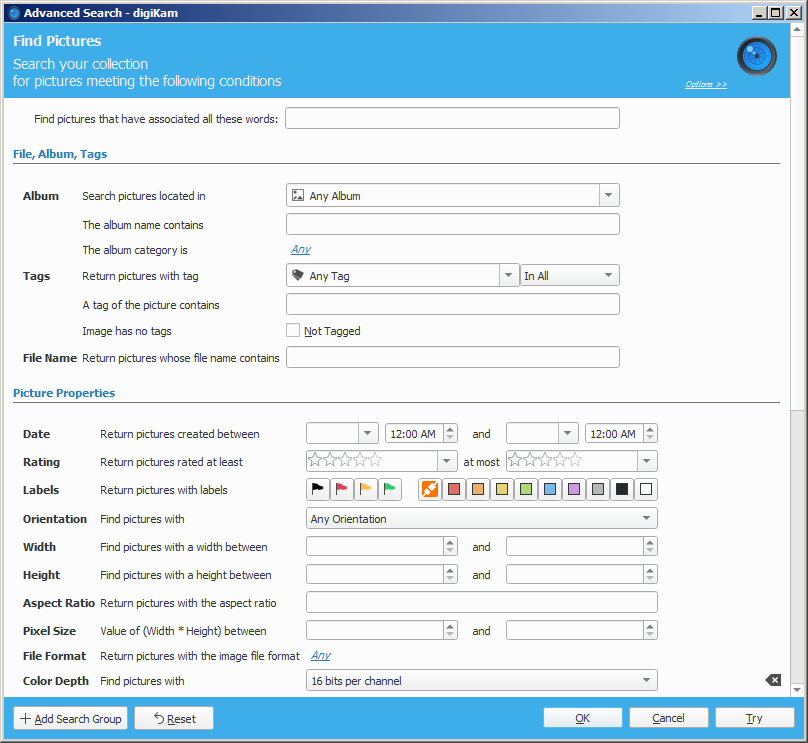 Status: Not portable, writes to C:\Users\hybrid\AppData\Local

Version 6 beta 3 was released last year. The plan is for the production version 6 to be released on February 10. Here are two quotes from the digicam.org website about version 6, which may be especially relevant to non-Linux users:

“A huge factoring of source code has been done to reduce external dependencies again with the goal to simplify application compilation, packaging and maintenance for the next years.”

The Windows build of Version 6 will include Dr. Mingw, which is a Just-in-Time (JIT) debugger.

Stephen Leibowitz wrote: ↑
Thu Jan 10, 2019 6:23 am
“A huge factoring of source code has been done to reduce external dependencies again with the goal to simplify application compilation, packaging and maintenance for the next years.”

As Stephen Leibowitz suggested earlier in the thread, the program did see some really positive updates. I retested recently and the crashing discussed previously seems to have mostly been worked out. Also, this program did *finally* add a functionality I've been looking for: you can select multiple thumbnails and modify just those items for size, color, conversion, filters, etc. Wonderful news.

Unfortunately it's not portable ...

Status: Not portable, writes to C:\Users\USERNAME\AppData\Local\digikamrc. Also writes to \AppData\Local\kxmlgui5\digikam\ I was also unable to determine how to get the photos database to work within the local folder.

Resource: Still huge; the download is 275 megs, install is 1.3 gigs, RAM was 313 megs on my Win10x64 system. Again, this is a feature monster so at least this is one program who's size is comiserate to the features, but it's probably unwise to have it running in the background all the time.

Comparison to other programs here on the site: Like PhotoDemon, the program is primarily targeted to photographers and not for standard image addendums for screenshots, such as arrows, text, boxes, etc. Probably PhotoScape is the best program to play in both camps.
Causes: Stop the Earn It Bill! / Support Mozilla / Net Neutrality (discussion) | TPFC Discord channel
Top

The most prominent addition is a new plugins interface named “DPlugins” for Generic, Editor, and BQM tools. Also, the Dr. Mingw debugger component has been updated from version 0.8.2 to 0.9.1.

DigiKam has scalability. The default database engine is SQLite, but MySQL and MariaDB are good options for collections with a large number of images. See
https://docs.kde.org/trunk5/en/extragea ... p-database
https://scribblesandsnaps.com/2018/10/1 ... d-mariadb/
Top

webfork wrote: ↑
Sat Mar 16, 2019 8:57 am
Status: Not portable, writes to C:\Users\USERNAME\AppData\Local\digikamrc. Also writes to \AppData\Local\kxmlgui5\digikam\ I was also unable to determine how to get the photos database to work within the local folder.

Perhaps I am missing something, but I suspect that the two AppData folders can be made portable by setting the environment variable %LOCALAPPDATA% to the portable location. A batch modifier might also be helpful by setting the current drive to that of the removable drive.

Here is a batch file demonstrating these ideas:

In the “The SQLite Database” section is a screenshot of “Database Configuration.” The user can set the location of three databases. It says, “For performance reasons, it’s also recommended not to use removable media.” I think that performance should be acceptable in most cases when using Thunderbolt or fast USB drives. webfork’s posting indicated that the storage requirements for digiKam are hefty. It is out of the range of most current thumb drives, but not of larger removable drives.

MySQL and MariaDB are also options for digiKam storage. It may be wise to first focus on the simpler option of using SQLite in implementing a portable version of digiKam.

Later in the web page is the section “Collections Settings.” There is a screenshot of “Root Album Folders.” One of the options is “Collections on Removable Media.”
Top

It is out of the range of most current thumb drives, but not of larger removable drives.

You can get a 4 gig drive for almost nothing and the program itself is only 1.3 gigs so it's not out of the realm of possibility. I suspect they're trying to address the fact that you could run the program, all pictures, the database, and do all that on a system that may or may not embrace a full USB 3.0 hardware. In that case I can see some bottlenecks and some frustrated support posts. They don't want to try and guess about what hardware you're using and its therefore better to stay focused on local installs.

Still, so long as there's a pretty intense caveat, I think there's a case for taking everything with you. If I keep using the program, I might post something to their issue site in the future and try to do just that.
Last edited by webfork on Thu May 02, 2019 3:56 am, edited 1 time in total.
Reason: (cut a dumb sentence)
Causes: Stop the Earn It Bill! / Support Mozilla / Net Neutrality (discussion) | TPFC Discord channel
Top

That's some interesting info and a straightforward portability workaround. Thanks for posting.

I have been working to make Krita portable. This made me aware that improvements were possible to the digiKam batch file I posted in #7 to this topic on May 1. The batch file should be on the same drive as digiKam, but does not have to be in the same folder. Here is the improved batch file:

The first time the program is run, it will start with a configuration assistant known as “The First Run Dialog.” On the “Configure where you keep your images” screen, the assistant will propose a location such as H:\digiKam\Pictures . It is the value of the USERPROFILE environment variable with \Pictures appended. Drive letter assignments can change for removable drives. To point to the removable drive, there should be no explicit drive assignment. In this case, delete H: . The next screen is “Configure where you will store databases.” To store on the removable drive, the user should similarly delete any explicit drive assignment.

An alternative is to store the images, and even the databases, on one or more network drives. The Windows Map Network Drive facility or the Net Use command can be used to assign an available drive letter to a network storage space. digiKam can then be configured with that drive letter and a folder.

The assistant will propose the folder Pictures for the image and database files, and offer to create it if it does not exist. The user can choose a different folder name. To increase the separation from the code, the user can specify a folder, new or existing, that is outside the digiKam folder. The user can also store the database files in a different folder than the image files. More folders can be added later for the image files from the Settings menu.

I will submit an enhancement request to the digiKam team to make available a Zip file version of their application. In the meantime, install/copy/uninstall or use Universal Extractor.

The digiKam download repository now has the Windows version available in the .tar.xz compressed archive format, in addition to the .exe installer. You can use 7-Zip, PeaZip, or similar programs to extract from the Win64 or Win32 .tar.xz file. Unlike the Zip format, there are two format layers. xz is the compression layer and tar is the archive layer.

Since I have broached the subject of Krita, how about adding it to the Portable Freeware Collection? The batch file I wrote for Krita is very similar to the one in this post. I posted information about my portable Krita version at
https://forum.kde.org/viewtopic.php?f=1 ... 24#p416324

In addiion to my environment variable approach to making Krita portable, there is the PortableApps.com version. Also, I have a high regard for yaP. Perhaps tproli could update its Krita config?

Version 6.4.0 is out and I'm really pleased. I had lots of fun playing with this program and it's various different effects. If you want to blow a few hours making cool stuff happen to your photos or desktop backgrounds, I highly recommend both this program and PhotoDemon. I could probably produce a whole series of videos just using both of those free tools.

There's so much going on inside this program, there's not just one JPEG repair function (something I did a bunch of reasearch on just last month), this program has TWO of them baked right in:

Open Image Editor and then:

Stephen Leibowitz wrote: ↑
Tue May 07, 2019 10:32 am
This made me aware that improvements were possible to the digiKam batch file I posted in #7 to this topic on May 1. The batch file should be on the same drive as digiKam, but does not have to be in the same folder.

I was waiting until the new version came out to test this and so far, so good. Thanks!
Causes: Stop the Earn It Bill! / Support Mozilla / Net Neutrality (discussion) | TPFC Discord channel
Top

So digiKam 7.1.0 is out, but the changelog is mostly bugfixes from what I can see. Instead, I'll reference the 7.0.0 release from two months ago that is really https://www.digikam.org/news/2020-07-19 ... ouncement/. There's a lot going on here but a few key things that have come up in these forums is HEIF support is now included, with AVIF on the way.
Causes: Stop the Earn It Bill! / Support Mozilla / Net Neutrality (discussion) | TPFC Discord channel
Top

I did some more digging and found a notice of a working with PortableApps download last year (https://www.digikam.org/news/2019-08-04 ... ouncement/), and that the binary tarball can be decompressed without install, but it's unclear if it's actually portable or not, just that you can get around the installer function.

I couldn't find anything clear on the PA site on this topic. The last thing I found was a year ago: https://portableapps.com/node/59489
Last edited by webfork on Fri Sep 18, 2020 8:23 pm, edited 1 time in total.
Reason: (better wording)
Causes: Stop the Earn It Bill! / Support Mozilla / Net Neutrality (discussion) | TPFC Discord channel
Top

To the best of my knowledge and despite past pledges, still no straightforward info on portability.
Top
Post Reply
15 posts • Page 1 of 1