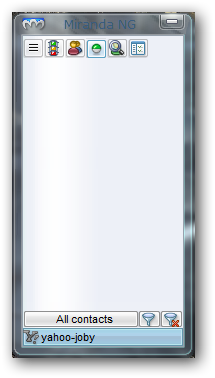 by guinness
A reason for the fork was "slow progress", but a new stable version of Miranda IM was literally uploaded 3 weeks ago.

If you're a fan of Miranda IM, NG is worth trying. I'm not sure which version will 'win' if that will even happen, but we had lots of users request the NG fork so we made it available at PA.c. Personally, I'm a Pidgin user (and use the Pidgin Skype plugin to connect to a local Skype install when at home).

by guinness
I'm actually unbiased as I use the classic snail mail, carrier pigeon or the slowly dwindling e-mail to connect with people I know.

by MiDoJo
I've been using the 64bit NG and (other than 64bit with most of my plugins available) it's relatively the same.
Took at bit to reconfigure to be like my previous 32 bit MIR
but yeah it's still considered alphaish so maybe a mention in the miranda entry at most.

by freakazoid
Switched to Miranda NG.

Here's a list of differences between the two:
http://wiki.miranda-ng.org/index.php?ti ... Miranda_IM

by freakazoid
Submitted to TPFC: http://www.portablefreeware.com/index.php?id=2507

Thanks for doing that

by webfork
Miranda NG and the Tox network

If you don’t trust that network, you can also install OTR for an additional layer of security. That’s on the download page and is installed similar to the process above (move items in plugins folder to Miranda NG plugins folder). Then restart, click the lock icon that appears in each message window, and follow the instructions.

by webfork
I needed to connect to the WhatsApp service so I tested out Miranda NG's plugin for that service and unfortunately it wasn't working. I tried to dig into the site forums but didn't make much progress. Anyone know of a working WhatsApp connector?

by webfork
So I saw on the Miranda NG home page that the project is calling itself the Miranda IM "successor": https://www.miranda-ng.org/en/ . I thought this was presumptuous, but it is notable that Miranda IM hasn't seen any updates since April 2018 and the website is now offline. It's looking a bit like LibreOffice vs. OpenOffice at this point.
All times are UTC-08:00
Page 1 of 1