This is just false.

Firefox's old add-on system gave add-ons pretty much direct access to Firefox internals. Changing just about anything had high potential to break add-ons because there was always some add-on that relied on a particular implementation detail. And Mozilla did spend effort to avoid changes which would break add-ons.

In the end Mozilla adopted WebExtensions, providing a stable API for add-on developers to develop with. WebExtensions are much less powerful than traditional extensions, but don't tie Mozilla's hands. This was soon followed by "Firefox Quantum", a bunch of performance improvements Mozilla can finally make when they can change Firefox internals freely without breaking extensions. Quantum is much faster than old Firefox versions, showing how much old add-ons were holding them back. (However, I agree that the power of old extensions was very nice, allowing many fantastic add-ons such as Tab Mix Plus. Losing them is still a bitter pill to swallow.)
My YouTube channel | Release date of my 13th playlist: August 24, 2020
Top

This is just false.

Rest assured that many (especially former contributors) see it entirely different. There have been websites around for years, from former contributors/programmers, where they vent their anger at that firm and assert they want nothing to do with that corporation anymore. Be that as it may, I would never "donate" or "support" a big firm like that. I might occasionally donate to a single programmer, if I use his program for longer, but supporting a huge "corporation" (especially in the IT world) sounds just too ridiculous to me.

dot wrote: ↑
Mon Dec 30, 2019 3:25 am
Rest assured that many (especially former contributors) see it entirely different. There have been websites around for years, from former contributors/programmers, where they vent their anger at that firm and assert they want nothing to do with that corporation anymore. Be that as it may, I would never "donate" or "support" a big firm like that.

To be clear, I'm supporting Mozilla not because they're going to fix the Internet, but because the alternatives are terrible. While I was not part of the Firefox Add-On community, I did read about frustrations with that group. I also clearly remember Microsoft's my-way-or-the-highway attitude with most of their tech. I just think this is comparing apples and oranges:

This might be old news, but Startpage is now (partially?) owned by an advertising company, System1:

Probably a good idea to use something else or put Startpage as a backup option and not as your primary search engine. Searx is still my default, but I've started using DuckDuckGo more recently as my secondary option.

Some other search engine options can be found on the same site:

There's a thread over at ycombinator talking about the superiority of the Yandex fuzzy image search tool (https://yandex.com/images/ ) when basing your search on another (similar) image.

DuckDuckGo has a pretty good image search. Can filter by size and color.
is it stealth?

Good to know. Thanks.

Perhaps. But DuckDuckGo (like some other hyped alternatives used to do) still connects to Amazon which is about as omnipresent on the Internet, or even more so by now, than Google. It's the reason why I don't use this SE and other SEs that behave (or when they behaved) like that. Personally, I'm sticking to the ultra-fast "eTools" SE (mentioned here somewhere) which is rather perfect for my needs.
Top

Another vote for https://www.etools.ch/ search engine.

Akin to banking systems, watches and chocolates "Made in Switzerland"

Etools will also obligingly format your search results into a neat pdf file, when ticking the As PDF option from the Results Tool sidebar (see hereunder) 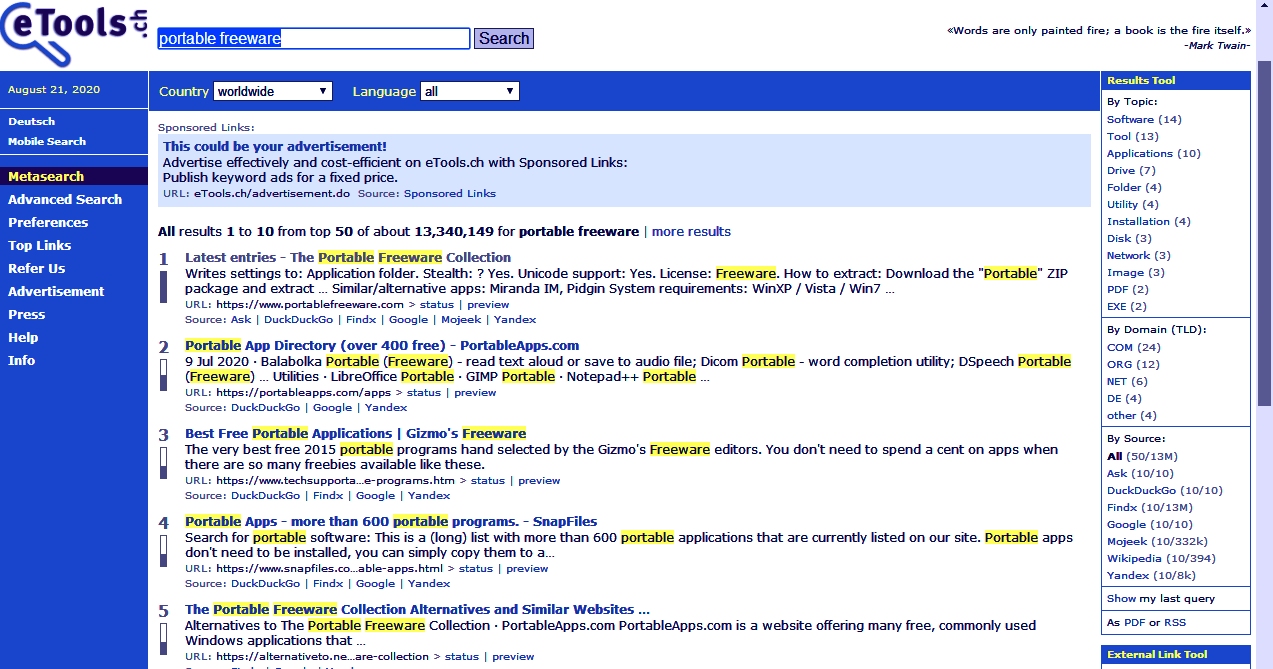 For those looking for a Google alternatives along with privacy analysis (and a lot of other alternatives to other Google services), a website I used and will come back to: https://degoogle.jmoore.dev/#web-based-products

The page is just a huge list of non-google/pro privacy tools, but the site is primarily mobile-focused and not focused on a lot of tools we highlight, but still interesting.
Causes: Stop the Earn It Bill! / Support Mozilla / Net Neutrality (discussion) | TPFC Discord channel
Top
Post Reply
191 posts